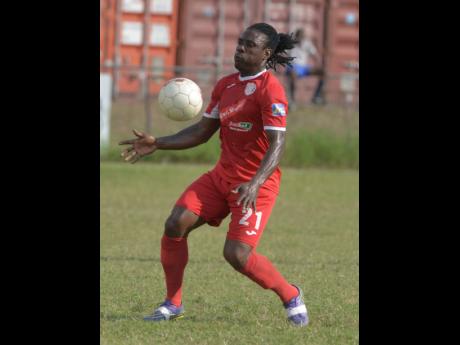 Olympic Gardens FC have received a boost in their quest to capture this year's Magnum/KSAFA Super League title with the acquisition of former national striker Jermaine 'Tuffy' Anderson.

The 40-year-old Anderson, who was once considered one of the most feared strikers in local football, joined the newly promoted Olympic Gardens from Boys' Town last month.

"I think you can look forward to seeing him very soon because I know that he is itching to go out there," Hemmings said. "He has signed with the club, but we have made decision not to play him as yet. But he has been moving very well in training so you will see him in short order.

"He has been showing some leadership qualities and players definitely respect him because since he has been in training in the last three weeks things have been going well with him."

Olympic, who are unbeaten so far in the Super League, have three wins and a draw.

Hemmings said that with the addition of Anderson, he is very optimistic that the team can win this year's competition and advance to the JFF All-Island Confederations Premier League Play-offs.

"I think with his experience, I believe personally that he will score some goals for us because he is a more mature player now," Hemmings said.

"I think our players have realised that this league is not easy because some players are getting complacent after three straight wins. Our draw with Barbican has definitely woken them up. However, I think we are working to go all the way and things have been looking good for us so far," he said.