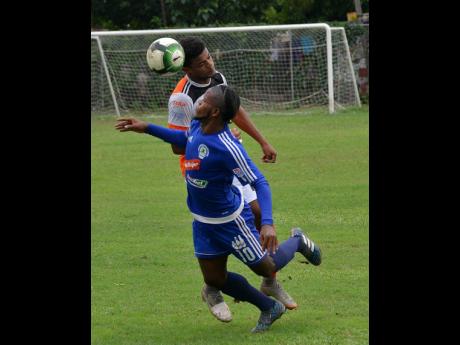 Mount Pleasant striker, Kemar ‘Bushy’ Beckford, netted a brace in his team’s 3-0 win over UWI FC a week ago, to overtake Dunbeholden’s De Andre Thomas atop the goal-scorer’s chart. The former Waterhouse forward then scored one of his team’s two goals in their 2-0 win over Arnett Gardens on Sunday to take his tally to 14, two ahead of Thomas, who has not scored in seven matches.

The 28-year-old, who has targeted 25 goals this season, believes he is regaining his form at the right time and has taken on the responsibility of leading Mount Pleasant to their first Red Stripe Premier League (RSPL) title.

“I have to be the man (for my team) because, when you talk about Kemar Beckford, you know you are talking about goal scoring. I showed it over and over at Rivoli, at Waterhouse and now at Mount Pleasant. I am the man and I have to stand up to the plate.

“I have to push my team because all my teammates, coaches and managers depend on me on a matchday, so I take that responsibility to show them I can do it and make my team proud, and I promised them I will do it. Right now, I am on top, I am on form, I’m injury-free and I am just working hard to go out and do my best on matchdays,” he told STAR Sports.

The player who has his sights on winning the golden boot this season, was stuck on 11 goals for some time, but he dedicated himself to doing a lot of extra training and is reaping the reward.

“I am always in the top five (scorers in the league) and, this season I am aiming at the leading goal-scorer crown. My teammates help me the best way they can, and I try to put away the chances when I get them, because I am just focusing on winning the league and making my family and the community proud,” he said.

Beckford is doing the hard work.

“When training is finished, I work on my shooting, because I have the skills and the runs, but to put the ball in the net is what I really love to do. So I work on my finishing. I always want more, so I push myself more and more every day,” he revealed.

Mount Pleasant play Molynes in their next game on Sunday, and Beckford will be pushing for a hat-trick in that game. “The last game I played against Molynes, I scored once and missed a penalty, so I am coming to take a double or a hat-trick,” he said.