Jamaican jumper up for US-Collegiate award 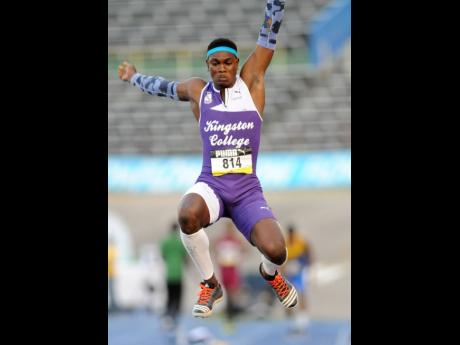 Carey McLeod, who starred for Kingston College at the 2017 ISSA/GraceKennedy Boys and Girls' Championships, has been nominated for an National Collegiate Athletic Association award after a fine indoor season. Big efforts in both in both the long jump and the triple jump have earned him a nomination for the NCAA indoor field event athlete of 2020. He bounded into contention with personal best jumps of 8.19 and 16.68 metres, respectively.

The long jump mark is the best on the US college circuit and gave the Jamaican University of Tennessee second-year student victory at the South Eastern Conference Championship. McLeod placed second there in the triple jump, an event in which the only NCAA athlete with a longer mark is fellow Jamaica Jordan Scott.

The other nominees are Chris Nielsen, the 2019 Pan-American Games pole vault gold medal winner, and Gleb Dudarev, a thrower. Nielsen cleared 5.93 metres last month and Dudarev scored in the weight throw with a huge distance of 24.38 metres. Voted South Eastern Conference field event athlete of the year, McLeod will hoping that his combined efforts will outlast Nielsen, whose big vault is a collegiate record, and Dudarev, whose throw is the 11th best in college indoor track and field history.

McLeod has come a long way since he squeezed into the 2015 Boys and Girls Championship class 1 triple jump final, while at Garvey Maceo High School. He blossomed under the instructions of expert coach Jeremy Delisser at Kingston College and won both events at Champs and the long jump at the Carifta Games in 2017.

After a year at Emporia State, he moved to Tennessee and built his 2020 season to a crescendo at the South Eastern Conference Championships.

If McLeod does win the award, it will provide a measure of consolation. The biggest meet of the season, the NCAA Championships has been cancelled because of the coronavirus, along with its outdoor counterpart. McLeod isn't the only Jamaican who is affected as he has compatriots who were among the top NCAA performers in eight different indoor events. They include Scott and O'Brien Wasome, who are the last two NCAA indoor triple jump winners, a sprint crew including 2019 North American Central American and Caribbean 100 champion Waseem Williams and diminutive speedball Kiara Grant and 2018 World Under-20 110 metre hurdles king Damion Thomas.

In addition, St Lucian Julien Alfred was heading to the NCAA Indoors with the fastest time over 60 metres - 7.10 seconds. Alfred ran at Champs for St Catherine High before heading to the University of Texas.