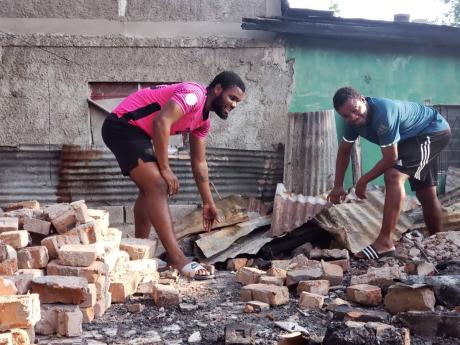 Marcel Gayle (right), head coach of Waterhouse FC, helps his player Akeem Chambers (left) clear rubble from the site where his house once stood, as fire destroyed the young footballer’s home on Saturday.

Jamaica and Waterhouse's goalkeeper Akeem Chambers is now picking up the pieces after his three-bedroom house off Olympic Way in Kingston was razed by fire on Saturday morning.

Chambers and his younger brother, Tafari, who is also a goalkeeper at Harbour View in Red Stripe Premier League this season, and their mother lost everything in the fire.

"It has been devastating for me and my brother, but we are just happy that no lives have been lost, and we can rebound," said Chambers.

"We just have to stay strong for our family because I have a one-year-old daughter who was with my girlfriend, and they were very terrified with what took place, but I am just happy that they are okay."

When the STAR Sports visited community on Saturday, a number of Waterhouse's players, including defender Shawn Lawes and head coach Marcel 'Fuzzy' Gayle, were at the scene offering their support to Chambers.

It is reported that at about 2 a.m. on Saturday, neighbours saw fire coming from the house and raised an alarm. However, the fired quickly spread to other sections of the house before it was burnt flat to the ground. The fire is being investigated by the fire brigade and the police.

"It has been heartbreaking for us, but we have received great support from the Waterhouse family because my teammates have been here giving us their support in whatever way possible," said Chambers.

"I am appealing now for financial support from anyone out there so that I can get back on my feet because I have lost everything in the fire," he said. "Whatever I receive I will be grateful for it because it has been very tough for us, especially with the coronavirus going around," Chambers said.

Chambers made his debut for the national senior team in November last year against Guyana at the Montego Bay Sports Complex.