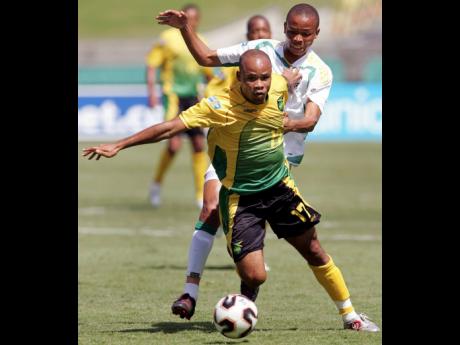 Jamaica’s Jermaine Hue breaks away from South Africa’s Nkosi during the second half of their CONCACAF Gold Cup match in 2005. Hue scored Jamaica’s opening goal in a 3-3 draw. 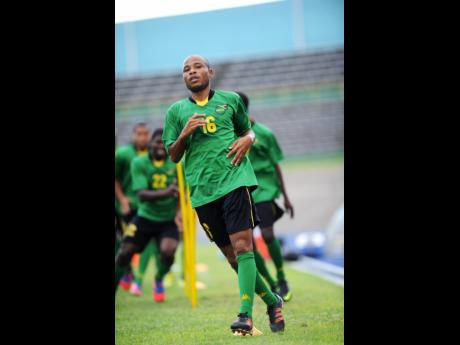 File Hue at a Reggae Boyz training session at the National Stadium in 2012.
1
2

But his most memorable moments playing the beautiful game happened while wearing the national colours at the 2005 Gold Cup and a friendly international against the famous England team in 2006.

The 2005 Gold Cup may have stood out in Hue's memory more than others as he scored his two international goals in the tournament. He netted against Guatemala in the first round of the competition en route to a 4-2 win for Jamaica over the Central Americans, and did so again against then invitees South Africa as the Reggae Boyz clipped Bafana Bafana 1-0.

"It wasn't the World Cup but it was a great joy to represent the country at that level and to be able to play in front of thousands of people. The whole atmosphere was amazing," Hue recalled. "To be able score on that stage was a dream come true."

Another great moment came a year later on Saturday, June 3, 2006, when the former St Thomas Technical midfield maestro would match skills with the likes of former Liverpool captain Steven Gerrard, Chelsea legend Frank Lampard, David Beckham and others when Jamaica took on England in a World Cup warm-up match at the theatre of dreams, Old Trafford.

"It was amazing. A Manchester United fan playing in the Theatre of Dreams against Beckham, Gerrard and those great English players," he recounted. "I think I did very well."