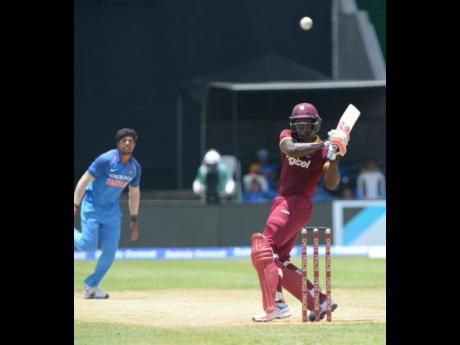 Jamaica and West Indies batting all-rounder Rovman Powell will be one of the few Twenty20 (T20) squad members who will turn out in the three-day warm-up game against New Zealand 'A' starting today.

Powell made it clear that he wants to showcase his all-round capabilities in all formats of the game, and the three-day red-ball warm-up game is the perfect platform to display that notion.

In his last red-ball outing, Powell made six and 16 and picked up three wickets for Jamaica against Barbados in the West Indies Championship in Kingston in January of this year.

However, with the Windies still on the lookout for consistent middle-order batsmen, Powell believes he can fill that void and wants to impress the selectors in the upcoming warm-up game in Queenstown.

"I am looking forward to the game as I am looking to show my all-round capabilities. Whenever I am given the ball I want to put the ball in the right areas and get wickets, and whenever I am batting, West Indies need batters who can bat for a long time. I am going to try my best to go into those games and bat time, bat for a session or two," said Powell.

Despite the frigid temperatures in New Zealand, Powell says the team has been acclimatising well and that the mood in the camp is very good, having completed their 14-day quarantine recently.

"It's a pretty good mood, the guys are gelling pretty good. At nights, we have some time that we lime together as a team, and I think that builds good camaraderie. It's just now for the other guys to join us," added Powell.

The right-hander, who is also looking to make his 27th appearance for the West Indies in the upcoming three-match T20 series, says he is looking to fine-tune all facets of his game, knowing that a stiff test awaits from hosts New Zealand.

"We are not the best cricketers in the world and we are always cricketers in training. We are always looking to improve our game. I think the key to success in this series is to do what we did in Sri Lanka and be consistent and precise in everything we do."