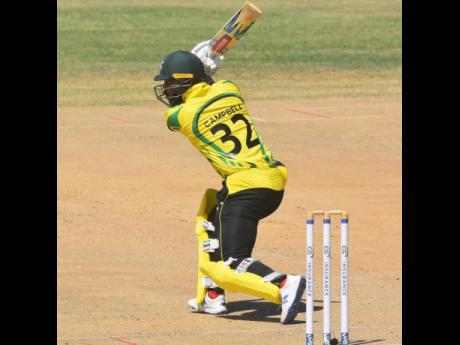 Jamaica Scorpions’ John Campbell plays a shot during his knock of 88 runs against the Trinidad and Tobago Red Force in the semi-final of the Regional Super50 competition yesterday.

Jamaica Scorpions captain Rovman Powell is lamenting the number of dropped catches that his team put down in their losing cause against the Trinidad and Tobago Red Force in their Regional Super50 Cup semi-final clash yesterday.

The Scorpions went down by six wickets to the Red Force team, who chased down the 255 runs posted by the Jamaican franchise, thanks largely to a brilliant knock of 68 from 70 balls from Lendl Simmons and an unbeaten 54 from 40 balls from Nicholas Pooran, and 36 not out from captain Kieron Pollard.

The victory charge was first set up by Simmons, who posted a 63-run opening stand with Evin Lewis. But that could have amounted to nought if Nkrumah Bonner had held on to a steeper on the boundary off the bat of Simmons in the first over of the innings, bowled by Jamie Merchant.

John Campbell also put down Lewis at slip who went on to make 24, while Derval Green also spilt a sharp running chance in the deep off the bat of Pooran later in the innings.

"Again drop catches cost us. If we had caught Simmons in the first over, it would be a different ball game. At the halfway stage, it wasn't a below-par effort, but we knew that if we had fielded better and bowl well, we could have made a game out of it," said Powell.

Earlier, the Jamaicans put in a much better display with the bat thanks to half-centuries from the returning John Campbell and Brandon King.

The West Indies opener Campbell showed his class with a patient 88 from 131 balls which included four fours and one six.

The left-hander shared in a 108-run second-wicket partnership with King who made 58 from 81 balls with five fours and a six.

Campbell then added 58 runs for the third wicket with Andre McCarthy who chipped in with 35, while Nkrumah Bonner made 20.

Man-of-the-Match Ravi Rampaul bagged four for 29 to peg back the Scorpions who were at one stage 171 for three in the 37th over.

"I think we didn't finish the innings well and that has always been a problem for us throughout the entire competition and today it showed. It's for us now to take up the pieces," he added.