Goule can win a medal at the Olympics – Kenia 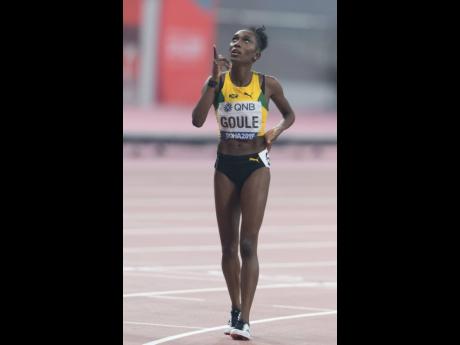 Natoya Goule could be the first Jamaican woman to win an Olympic medal in the 800 metres. That's the expert opinion from no less than Kenia Sinclair, the 2008 Olympic finalist.

Retired after the 2016 Olympics, Sinclair points to a fast indoor time - 2:01.08 seconds - as evidence of Goule's good form coming into the rescheduled Olympic year. On March 18, Sinclair declared, "Based on her indoor performance that she had recently and just running, I feel like Natoya can be the first Jamaican female athlete to medal at the Olympics at 800 metres. She just has to stay motivated, positive and despite this pandemic, I can see that the pandemic did not affect her that much because she came out indoors and she's still on top, performing awesome."

Goule produced that time on January 30 at Clemson University South Carolina, where she trains under the guidance of Jamaican Mark Elliot, the university's director of track and field.

In 2018, Goule lowered Sinclair's 12 year-old Jamaica record of 1:57.88 seconds to 1:56.15 in Monaco, and the 2006 World Indoor Championships runner-up expects Goule to continue to excel. "She has surpassed Kenia. Natoya broke the Jamaica record. I went out and I congratulated her. I was so proud of her. I was so happy watching that race. I got so many chills because I left and she's just picking up the slack and she's even surpassing my performance," she said, smiling as she recalled Goule's record runs.

With gold in 1994, silver in 2006 and bronze in 2018 respectively, Inez Turner, Sinclair and Goule are the only Jamaican women to win medals in the Commonwealth Games 800. In 2019, the pencil-slim Goule became the second Jamaican to compete in a World Championships final, following a 2011 accomplishment by Sinclair.

Noting that Goule has good 400-metre speed, Sinclair added a word of tactical advice. "Natoya is an awesome athlete and I always tell her. I always tell her, 'Natoya, you have to run your race'. In a 800-metre, they're always going to have a rabbit so you never want to be someone's rabbit. You have the capability of running way better than I do."

During her career, Sinclair put Jamaica on the middle distance radar and she is confident her 2016 Olympic teammate will do the same. "So I just want her to stay focused, just stay away from negativity and just go out there, run her own race," she said of the current star. "Just continue to make Jamaica proud for distance running."