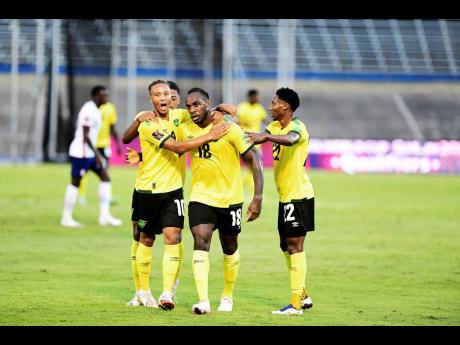 Reggae Boyz Bobby Reid (left), Devon Williams (right), and Leon Bailey (back) celebrate with teammate Michail Antonio after his goal against the USA in World Cup qualifying at the National Stadium on Tuesday, November 16, 2021. 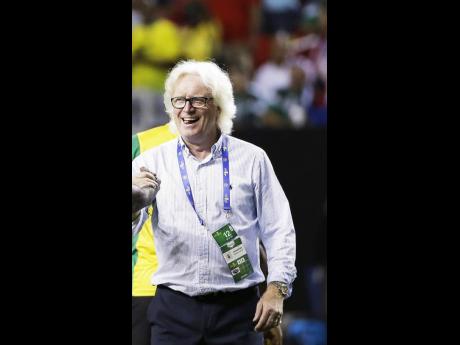 Former Reggae Boyz head coach Winfried Schaefer says he is willing to have a discussion with the Jamaica Football Federation if they offer him another role in the national programme.

Schaefer, who took the Reggae Boyz to the Concacaf Gold Cup final in 2015, was appointed head coach in 2013 and served in the role until 2016.

"I am open to talking to the federation," Schaefer told STAR Sports. "If the federation wants, then we will have to find the best way for the football and Jamaica.

"Nobody from Jamaica has contacted me but if they do, we will have to talk first."

Schaefer has been following the progress of the team during the World Cup qualifying campaign, and while the team sits in sixth place on seven points, needing a spot in the top four, with six games to go, he is optimistic that they can still qualify for Qatar later this year.

"My idea is that they should never give up, and why not? Because it is still possible (to qualify) but you need patient," he said. "You have many good players outside of Jamaica, in England, Belgium, and the other parts of Europe, and all have to think 100 per cent for Jamaica in these qualifiers."

The table is led by Canada on 16 points, with the United States next on 15, while Mexico and Panama round out the top four with 14 points each. Costa Rica are just ahead of the Reggae Boyz on nine points.

The top three teams from Concacaf qualify automatically to the FIFA World Cup while a playoff berth is in the offing for a fourth-placed team.

The Reggae Boyz are scheduled to play Peru in a friendly match on January 20 in Lima, Peru, before hosting Mexico in their World Cup qualifier at the National Stadium seven days later.

The team will play Panama away on the 30th then they are at home to Costa Rica on February 2; El Salvador on March 24; Canada away on March 27; and Honduras at home on March 30.

The Reggae Boyz are coached by former assistant coach Paul Hall, who was appointed for the remainder of the World Cup cycle after the dismissal of Theodore Whitmore in December.

Schaefer is the manager of Al-Khor Sports Club in the Qatar Premier League.