Jamaican pedestrians are a different breed 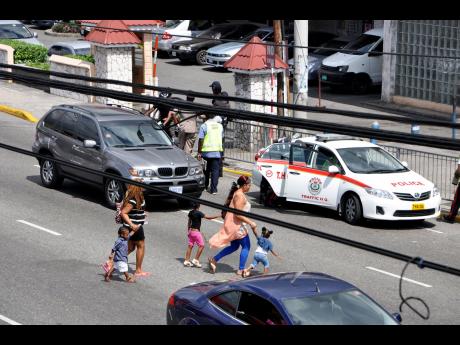 The silly season is upon us once more and the streets are jam-packed with cars, motorcycles, pedal cyclists and pedestrians. This is the time of year when one has to be especially careful on the roads because, not only do you have to be wary of the crazy people behind steering wheels and bar handles, but you also have look out for the zombies on foot.

I have come to realise that there are several types of pedestrians. During the course of the year you encounter them in small doses, but as the year comes to an end, they seem to come out in droves.

The Jamaican pedestrian needs to be studied. My wife posits that they are breed onto themselves. Just like it requires a special breed to be a taxi driver, especially a robot taxi driver, the same can be said of many of our pedestrians.

They care not about any of the rules of the road. They somehow believe the street belongs to them, every square centimetre of it. For example, simple things like knowing how to respond to traffic lights, for us drivers red is stop, green means go and amber means proceed with caution and prepare to stop and it should be the same for pedestrians. Or you would think so. Red is not go for a pedestrian, but do you realise that at some intersections in the city the way they behave you would have to believe that they are walking around believing that they are actually vehicles.

Let me give you an example. On Hope Road, there is an overhead light just below the Bethel Baptist Church. That light controls traffic that descends upon Half-Way Tree square where there is another set of traffic lights. I can't tell you how many times that previous light is on green and I am forced stop because people are crossing on the green light.

One day as I was approaching the light, it was on red and I braked as I approached, stopping a few metres away from the pedestrian crossing where a number of persons had gathered, I presume waiting for the light to change. The thing is, I couldn't understand why they were not crossing since the light was on red. I soon found out why. As the light changed to green and my foot hovered above the accelerator, I suddenly noticed that there were people in the middle of the pedestrian crossing heading towards Juici Beef Patties on the other side of the road.

I wind my window down, gesticulating that the light is on green and they look at me with this expression on their faces that said, "Is what wrong with this fool?" Defeated, I wound the window back up and sat there waiting until the light became red again. Of course, I can't run the light even though the street is clear because there are several policemen standing just beyond the pedestrian crossing on the look-out for rogue taxi drivers. So, I am stuck until the light changes to green and there are no pedestrians crossing. Only then was I able to move.

There is another type of pedestrian, who I swear has a death wish or are just oblivious to the world around them. These are the type who just steps out onto the roadway as traffic rushes towards them only for them to react as if it is a grand surprise that actual cars are whizzing by. The type that annoys me most is the ones that step out in front of your car with their eyes saying, 'Lick me if you bad.' When I get angry enough I often push my head out and ask if they have ever seen a car in a hospital or morgue.

This madness is passed from generation to generation because I have often noticed how some women drag their children across the street seemingly oblivious to how pedestrians should use the roads. Invariably these kids grow up thinking that this is the norm and so make the lives of drivers a living hell.

I am thinking that the time has come to for there to be a pedestrian manual, similar to the one that drivers have to study before they take the driver's test to get their licenses. If that doesn't happen there will come a time when a few drivers will get angry enough to bring a whole new meaning to the term road rage.