Counting down to Christmas 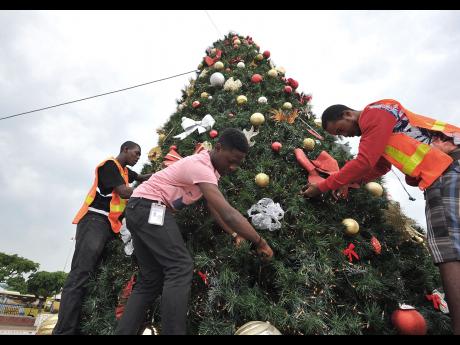 Norman Grindley/Chief Photographer Horace Moody, (left) Dwayne Smith, (right) from the Kingston and St Andrew Corporation and Anthony Mead, an independent decorator putting on the finishing touch to this Christmas tree in the St William Grant Park in downtown Kingston in November.

As anybody who knows me, knows words are really my thing and numbers are definitely not. My favourite number is probably the numbers that is an Old Testament book in the bible. Beyond ordinary counting and simple addition and subtraction, I've never been any good with those discombobulating things called numbers. Yeah, man, a me say two plus two is 22. What say you? Plenty or few?

In fact, I am definitely one of those marginally numerate Jamaicans mentioned in the Tony 'Paleface' Hendriks comedy routine, who can effectively count from one to 20 using more than just numbers. I'm talking about the folks who count by saying one, two, couple, few, whole heap, nuff and plenty. Back in the days, when I was in school, Maths classes felt like painful punishment that involved teachers talking an indecipherable alien language understood only by nerds.Thankfully, some very wise person invented that thing called a calculator, so adding and counting is now much easier.

Some people count things, while some watch time and count date. Of course, some people count both. Whether it is a birth or a birthday, an anniversary or some other special day, everybody is counting down or counting up to something. Many persons were counting down to the day, and faithfully counting on Mama P to officially announce an end-of-year election so they could count on the surety of eating some holiday food. But they did not count on the possibility of an indefinite delay, so dem bet buss!

But how about you? Your views count too. What are you calculating? What are you counting? Me, I try to ignore crosses and problems and put effort in counting joys and blessings. As Russian writer and philosopher Fyodor Dostoevsky said in a quote I once read, "man is fond of counting his troubles, but he does not count his joys. If he counted them up as he ought to, he would see that every lot has enough happiness provided for it."

Well, this is the season when happiness usually seems to be in vogue. Yes, friends and peoples. This is the time of year when 'peace on earth and goodwill to all men' is the talk of the town. Sadly, of course, it is very often just talk. Some people will loudly and religiously recite the pretty-sounding peace and goodwill rhetoric, while dem try dig off piece of somebody else's property. And if you ask some people, the only goodwill they can conceive of is to wish they had somebody to die and leave them some good money in the will. This is also the season when I can count on people to appear out of nowhere with long wish lists of expected Christmas gifts. Their number seem to increase each year.

My aversion to numbers, notwithstanding though, at this time of the year when we're approaching what is unquestionably the most popular annual holiday in the world, you can also count on me to help with the exciting countdown to the big day.

So, yes, folks, count with me nuh. Nine days from today will be Christmas. And one day after that will be the 12th edition of the

annual Christmas Comedy Cook-up at the Jamaica Pegasus hotel. And that's where I will be to help you count the chuckles, calculate the cackles, and tabulate the laughter-filled entertainment that will be delivered by eight hilarious comics, two dynamic hosts and an electrifying steel band. Unnu counting?