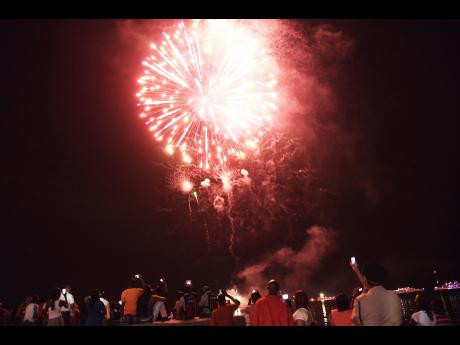 Gladstone Taylor/Photographer Jamaicans watch the light show to welcome the New Year during Fireworks on the Waterfront at Ocean Boulevard, Kingston, earlier this year.

Another challenging year is almost behind us and a potentially challenging one lies ahead. Going forward, however, I have a few things I wish we would think about adopting come 2016.

For too long we have embraced mediocrity and anarchy in the name of the hustle, and it has got us nowhere. Crime is high and employment opportunities for our youth are very low, but I think the time has come for us as a nation to change how we do things and start living for each other and, hopefully, things might start to change for the better.

The reason I say this is due largely to the fact that we have seen that despite the Government's best intentions, things have become increasingly hard for the average Jamaican. There was a recent report that an estimated 200,000 Jamaicans are undernourished. My guess is that many of that number are children born to women who are unable to care for them and to fathers who are nowhere around to lend support.

There are also reports that taxes could be added to additional goods and services and that many in the public sector are likely to lose their jobs. The Government has done its best to deny this, but you and I know that in this country, when news like this surfaces, 'if it no go so, it nearly go so'. Against this background, we can expect many Jamaicans to face daunting circumstances come 2016.

The only way we can overcome this is to work together. By doing so, we can, at least, create a better environment for us and our children. What does working together mean? Well, for starters, as Cliff Hughes says in his closing comments on Nationwide at

5 p.m. each day, "Let's start looking out for our neighbour." What I think this means is that if each of us starts looking out for each other, we can do a little more to help those of us in need.

What would help is if some of us would not be so proud as to refuse help when it comes our way. Accepting help is not a sin, but I have seen where many of us are so proud we would rather suffer than accept that we are in need.

The other thing I would like to suggest is that we do our best to eliminate the criminal element. Yes, we don't trust the police. Many Jamaicans believe the police to be inept, corrupt, poorly trained and lacking in leadership, but they are that way because every single member of the Jamaica Constabulary Force comes from a society we created. But if we start to create a better society, I truly believe we will create better policemen and women. This is not going to happen overnight, but the journey of a thousand miles begins with a single step. We need to take that step now before things get even worse.

We also need to do a better job at looking out for our young girls and boys and start paying attention to the things that are really important. Bling and hype are mere momentary distractions, but ensuring that our kids get proper education and are not preyed upon by paedophiles, or murdered by criminals is far more important to the success of any nation.

There are many other things that we need to do, but one of the most important things is that we stop allowing people to divide us along racial, class, and economic lines. We are not PNP, JLP, uptown or downtown. We are Jamaicans. We are revered by the world, and it's time we start being better and doing better for ourselves so that what the world sees will be the truth and not a facade.

Happy New Year everyone and may 2016 be a brighter and better year for you than 2015. The beauty of it is that if we all work together, we can make that wish become reality.