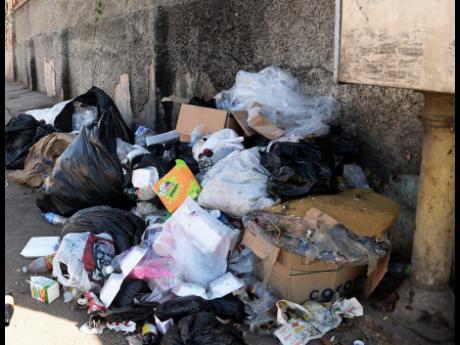 Household waste disposed of on Hanover Street in downtown Kingston.

I may have written about this recently, so bear with me because I can't help myself when I see things that bother me.

On more than two occasions this week, I just happened to be behind vehicles in traffic and witnessed someone from those vehicles dump trash out on to the street.

In one instance, several bits of garbage were discharged from the vehicle, which just happened to be a high-end motor car.

Why is it that we are like this? Is this the way we function in our own homes? Do we throw trash all over the floor of our living rooms or bedrooms?

If not, then why do we do this when we are on the road? It's nasty behaviour, and then we turn around and blame the government for the place looking like a mess. It's disgusting.

Have we lost all sense of pride? Do we not care how our country looks?

For those who like to throw plastic bottles, paper napkins and food wrappers through their windows, not thinking that there are consequences, have you ever seen those pictures of thousands of plastic bottles and bags along the shoreline and wonder who would do such a thing?

Every bag, bottle, food wrapper or paper napkin you nonchalantly discard through your car window ends up in the drainage system.

Eventually, they clog the said drainage system that you then turn around and blame the government for not cleaning.

This basically means that your actions are causing the relevant authorities billions of dollars each year to clean up your mess.

Had we not been that nasty, that money could have gone to fix roads, improve our schools, or help the police to fight crime.

But I guess you never thought about things like that. All you think about is getting rid of that bit of garbage that you can't be bothered keeping.

I keep my trash inside my car in a 'scandal' bag, which I dispose of in a skip where I live or in the garbage bin in my home.

Maybe you could think about doing the same, and, in so doing, save the country billions of dollars, prevent the drains from being clogged and prevent the streets from being a mess.

Having said that, isn't it time we began prosecuting people who litter the streets? The Anti-Litter Act makes provisions for that. Hire wardens to keep an eye on

The money spent hiring those wardens would prevent us from spending much more in the long run.

It makes sense. Let's get it done.