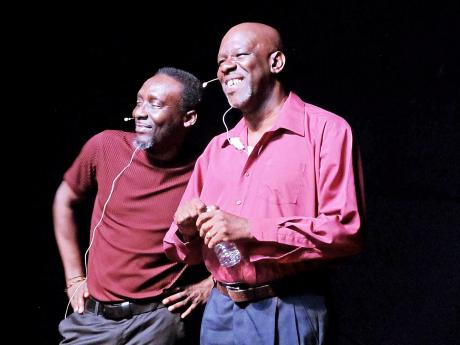 Life sure is interesting. My friend Gary Neita contacted me recently in his capacity as local production manager for a TV crew from San Andres. They were in Jamaica shooting a feature on our culture and entertainment, and they wanted to interview the Jamaican comedy duo that's most popular in their island.

I immediately assumed that he meant Ity and Fancy Cat. To my surprise, he informed me that next to Oliver Samuels, Bello and Blakka is the most popular comic act among the people of San Andres.They're also very fond of comic actress Andrea 'Delcita' Wright!

And I can bet that like I did, many of you who're reading this are now saying to yourselves, "San Andres? Which part dat deh again?" Well, for those who don't know, San Andres is a little island in the Caribbean Sea off the coast of Colombia. Politically, it and two other nearby islands called Providencia and Santa Catalina are part of Colombia. The official languages there are Creole, Spanish, and English.

Well, my brethren Bishop 'Bello' Bell had been in the US since late last year, but as fate would have it, he came back to Jam Rock just in time for us to have the pleasure of being interviewed by the crew from San Andres television station TeleIslas. And peeps, if unnu hear the interviewer Edgar 'Eddie' Pomare talk, unnu woulda swear him born and grow a Jamaica. Yes, peeps, dem very into Jamaican language.

Funny, eeh? Although many of us have never even heard of the place before, di people who live deh know 'bout we long time. Yes iyah, our music is very big in San Andres, Providencia and Catalina, as dancehall acts get heavy rotation on their local radio stations. I also learned that people like Tarrus Riley, Shaggy, Busy Signal, Christopher Martin, Kiprich and Lovindeer have performed in San Andres to rave reviews, on shows that have droves of people flying in from Colombia to attend.

And who to tell, after the Bello & Blakka interview buss pon TeleIslas, we may soon get invited to go crack few jokes over there. Dat woulda nice, don't it? Yeah man, it may even open up the floodgate fi a full-fledged Jamaican comedic invasion. In fact, mi a go start sharpen up pon my Spanish from now yah, because something tells me that San Andres is calling! Wah yu say? Vamos Amigos!