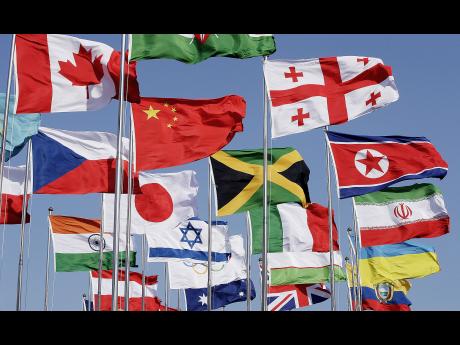 And of course, commercial interests are opportunistically cashing in on the hype by supplying fans of the beautiful game with all the paraphernalia they need to help them cheer on their favourite teams.

And as yuh done know, our people love excitement, so even folks who are not regular followers of football have suddenly become rabid fans, pundits and experts.

And everybody is busy declaring which team they're 'carrying'. So naturally, vendors are doing brisk business selling flags, caps, jerseys and other items all over.

Take a look around. There's now a flag seller at almost every street corner in our nation's capital. I find this fascinating.

Well look here nuh, I think I ruffled some fine feathers and annoyed a few folks, but hopefully also, initiated reflection that may even lead to further academic exploration, with some questions/observations I posted in a WhatsApp group, in response to this occurrence.

You see, I maintain that a nation's flag represents much more than just players on a football field. A country's flag is an important symbol of sovereignty with deep historical and cultural meanings.

Flags were planted to mark imperialist capture of lands, subjugation of cultures and annihilation of peoples. Flags were identifiers on ships carrying human cargo in the African holocaust called the transatlantic slave trade.

So with that in mind, I posed two questions. One, does one's affinity for a football team or the idea that you fancy the team's chances in the World Cup provide a valid rationale for a Jamaican to fly the flag of another nation on his car or home? And two, is it overacting to feel disturbed by the idea of seeing the flag of a former colonial European country being flown by a Jamaican of African heritage?

And guess what the reaction was? More heat than light, I think. Responses ranged from the ridiculous to the sublime. Smaddy even tek mi questions personally, it seemed.

I evoked some emotional retorts and earned some dismissive rejoinders, but mi nah tek back my talk. I'll happily consume aspects of some European culture, but mi nah wave dem flag. No iyah!

Flying a flag is a specifically significant act in the context of representation and the production of meaning. Wha you say?