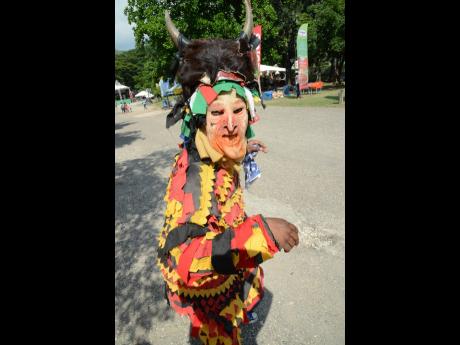 Junkanoo dancing was a big part of Funfest at Hope Gardens, St Andrew, in 2015.

Hey, Jamaican culture nice, yuh know. Yeah, man! I received a refreshing reminder about that fact over the weekend just gone, and all now it still sweet mi! Yes peeps, on Saturday, June 23, I got another wonderful chance to witness and experience the extent to which our popular, folk, traditional and contemporary culture is revered, respected and appreciated, especially overseas, among our homesick citizens in the diaspora and their Jamaican-loving foreign friends.

The occasion was an enlightening, engaging and exhilarating event called 'Ms Lou in Color' at the Rose and Alfred Miniaci Performing Arts Center at Nova Southeastern University in Fort Lauderdale. The production provided me the honour and pleasure of sharing stage with a multitalented, cross-generational cast of performers comprising more than 25 talented actors, actresses, singers and dancers in an entertaining variety cultural showcase infused with the work of Jamaica's iconic first lady of comedy, the inimitable and immortal Louise Bennett. The cast included my friend from way back, actress/comedian Ann 'Charm' McKenzie, and some adorable children from Sierra Norwood Baptist Church.

There were skits, poems and parodies exploring a range of topics. Some timeless, heartwarming songs from yard were delivered by the Jamaica Folk Revue led by Jennifer Grant and featuring the exceptionally versatile Nadine Taylor-Brady alongside the outstanding Marie Gill, who is also president of the Jamaica/USA Chamber of Commerce. There was scintillating singing from vocal virtuosos Tanya Marie Greaves and Abia Cilon, and a reggae-rocking, soca-infused performance from pop singer Becky Glacier. There was also an exciting interactive moment that had some of the patrons almost jumping out of their skin when a Junkanoo band entered through the audience and invaded the stage.

The evening also gave me a moment of nostalgic thrill, as I reunited with a childhood friend, Verma Thorn (now Barnett), who was my dancing partner in my first onstage performance when we represented Trench Town Primary in the JCDC Festival of Arts back in 1969. Trust mi, when we hugged to greet each other, I felt definitely experienced a deja vu vibe.

Talking about deja vu, the evening was made possible by Deja-Vu Theatre Productions a multicultural theatre group out of Florida, whose founder and president Sharon Cummings was creator, director, producer, head cook and bottle washer, and has been doing it as a labour of love for 16 years now. I hope she gets sponsorship support to do it again next year.