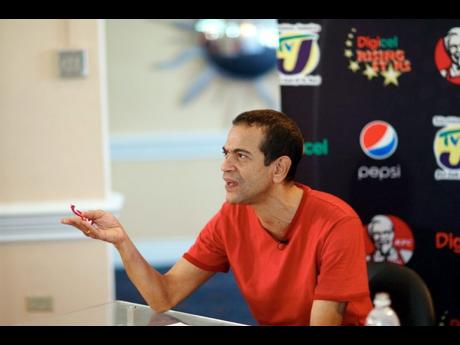 Look here nuh, is long time now since I made time to sit down and watch TV. Yeah, me and TV did kinda fall out. But while I enjoyed a sumptuous meal and great company during a visit with a beloved relative Sunday gone, the television and I had a fortuitous buck up, and now it looks like we may be back to reestablishing our relationship.

Why? I managed to get my first glimpse of the 2018 edition of the popular Digicel Rising Stars, and I was fully engaged. I like the 10 finalists. They are all promising young people who are clearly talented. And collectively, they present a beautiful representative picture of Jamaican variety and range, in the areas of looks, sound and personality.

The weird thing though, is that I was more engaged by the comments of the judges, especially the hilarious but caustic contributions from the enigmatic Anthony Miller. Trust mi, di man brutal. In fact, another 'b' word with the same number of letters as brutal also came to mind, but I'll play polite and not use it. Hehe! Seriously speaking though, if effortlessly speaking hard truths is a gift, Mr Miller's got it.

Yeah man, the two lovely ladies on the judging panel Alaine and Shuga, danced delicately around their choice of words trying to carve out the most affirming and encouraging ways to tell the contestants when the messed up. But the judge that many people love to hate him, just look them in the eye and talk the tings straight. Maybe it's because the lady judges are also talented performers themselves and can more easily speak from a place of empathy. So they try to encourage and reassure, while they offer their criticism.

I hope Anthony can take it as easily as he gives it, however, because from what I saw on Sunday, he's also prone to messing up. He told one contestant that her singing 'is discordant' when technically speaking, a solo voice can't really be discordant since the word denotes a context where more than one sounds clash. He also erroneously attributed Otis Redding's 'Sitting on the dock of the Bay' to Sam Cooke, and he shot down the announcer's correctly crediting 'Lady Soul' to the Temptations. I won't say yet who I think will win. But honestly, Mr Miller the scrooge is the main reason I'll be watching again!box-mi-back@hotmail.com