Time to get tough on bad drivers 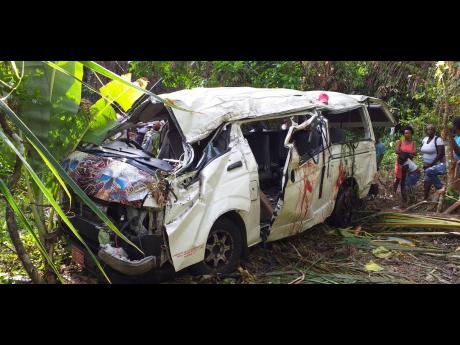 The ill-fated bus that crashed along the Black Hill main road in Portland on Monday, killing one student and injuring 26 other persons.

Why do we overthink so many things in Jamaica? There is now talk about setting up a hotline to report bad-driving taxi and bus drivers, and, I guess, generally poor drivers as well.

All of this sounds good on paper, but I don’t think it’s going to make any difference at all.

When we come up with ideas such as these, we need to understand first the culture within which we exist.

Most Jamaicans are not going to call anyone about any taxi or bus drivers. Why? Because nobody has any confidence that the authorities will do anything to change the situation.

Way back in 2011, I believe, Jamaica passed laws prohibiting lewd behaviour and the playing of music on public transportation.

That was eight years ago. I still hear music blasting from speakers on public transportation every time I pull up next to a bus or taxi in traffic.

Years before that, anti-litter laws were passed, and I can’t tell the last time anyone heard of anyone being locked up for littering or urinating on the streets. Do you see a trend here?

Jamaica has more than enough laws. The problem is, they are never enforced.

Why not just have police officers or traffic wardens strategically stationed across the city and on the highways?

Instruct them to prosecute aggressively incidents of careless and dangerous driving.

The government should also train and deploy vehicular inspectors across the island and make breaches punishable by seizing vehicles and imposing fines of up to J$1 million.

Police officers and persons employed by the Transport Authority who own or have shares in taxis and buses need to declare those vehicles and the routes that they service.

These officers should never be deployed to those routes. In fact, if the vehicle is in breach, it should be seized and destroyed, especially if there is any indication that that employee or policeman had tried in any way to influence any decision made in relation to that vehicle.

Every year, members of the public go about their business and rely on public transportation to get around safely. If they want to race, they could always go up to Dover in St Ann and let Kyle Gregg give them a few high-speed trips around the track.

Way too many people die because we are too lax on enforcement and punishment. For us to get taxi and bus drivers to drive within the parameters of the law, they need to bear in mind that serious consequences will come to bear.

That is the only way we will bring the recklessness under control.