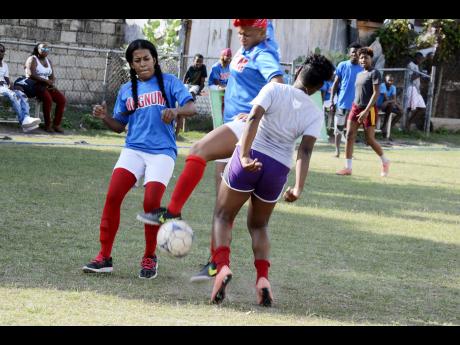 Milk, a member of the entertainment team, keeps away from a tackle. 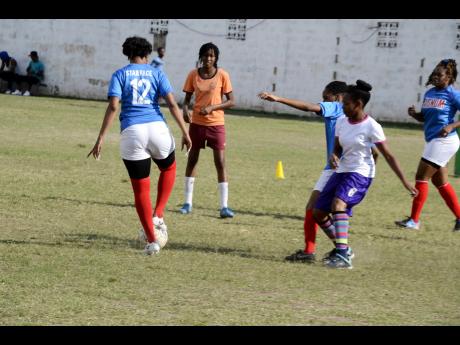 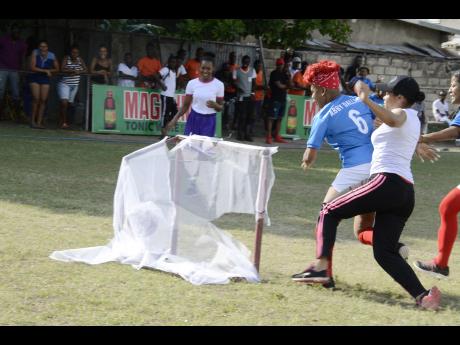 Goal! Abby Dallas puts one in the net for the entertainers. 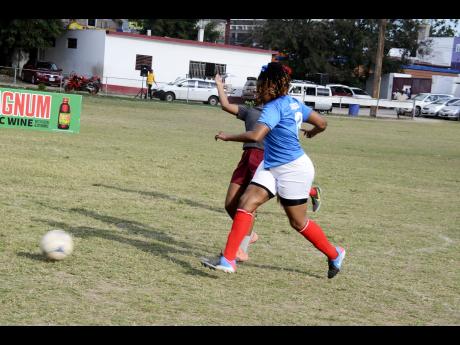 Stacious takes the ball around a defender during the Magnum Female Clasico held at the Maverley playing field yesterday.
1
2
3
4

On a day when intermittent showers threatened to put a damper on the Magnum Female Classico, the female officers from the Jamaica Constabulary Force (JCF) and several female entertainers were determined to execute a day of exciting football for members from the Maverley community.

Held at the Maverley Football Field on West Main Drive yesterday, the event was fairly well supported as community members turned out to watch the women in action.

The participants traded their usual uniforms and dancehall attire for shorts and football boots. With just $100 admission, it was clear that pressuring the pockets of the community members was not the main purpose of the event.

Recording artiste Stacious told THE STAR that the event was held with the hope of helping the Maxfield Park Children's Home while she and her fellow artistes, and the female JCF members had fun on Ash Wednesday.

"This event was a joint effort by the JCF headed by Constable McCaplin also known as 'Wowski' who is also a recording artiste," she said. "Today (Wednesday) is a holiday and so we decided to just come out here and have fun. I'm really appreciative of Magnum coming on board with this event and it is really just a good vibe. We're looking forward to growth in the years to come."

Mark Telfer of Magnum said the brand did not hesitate to come on board as they have always supported events geared towards community building.

"Magnum came on board because this is a part of the community and dancehall. It was an opportunity to give back outside of the typical dancehall sponsored event situation," he explained. "Supporting communities is what built this brand and that's what we are here for."

Pamputtae, Milk, Suva, DJ Naz, Climaxx, Starface and Abby Dallas were among the entertainers who made up the artiste team.