Magnum Kings and Queens runners-up to get cash prize 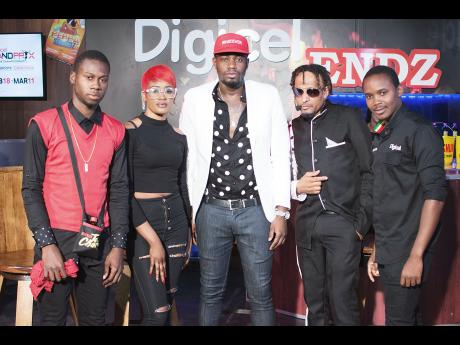 Ding Dong (centre) joins Pretty Boy Floyd (second right), Kamal Powell, Senior Sponsorship and Development Manager at Digicel Jamaica (right), and two of the contestants of Magnum Kings and Queens of Dancehall show in the Digicel Endz on Saturday night. Here, Powell announced that Digicel would be giving a $250,000 prize to each of the second place contestants in the show.

Second-place winners in Season 10 of the Magnum Kings and Queens of Dancehall competition will no longer leave empty-handed, thanks to a $250,000 cash prize from Digicel. Meanwhile, the first place prize winners will take home $1.5 million each, representing a $500,000 increase over the previous season.

"When it comes down to that final clash in the Magnum Kings and Queens of Dancehall competition, sometimes it's so hard to choose just one winner because of the quality of the talent that's on show," said Kamal Powell, senior sponsorship and development manager at Digicel Jamaica.

He continued, "So, in addition to the exposure they get from the competition, we want to give the runners up a financial boost to help grow their careers. Whether it's to pay for some studio time, promote their work, or invest in some additional training to improve themselves, we hope that they'll use this cash prize to grow their careers and make something of themselves after the competition. We don't want the last time we hear from them to be the final night on the show."

While the competition started out with 28 contestants, the artistes will lyrically battle it out for a spot in the final clash in May. This Saturday, contestants from Castle Red with the lowest votes will face-off for the chance to stay in the competition, while Wild Card selections from two of the judges will get their chance to perform on the show.