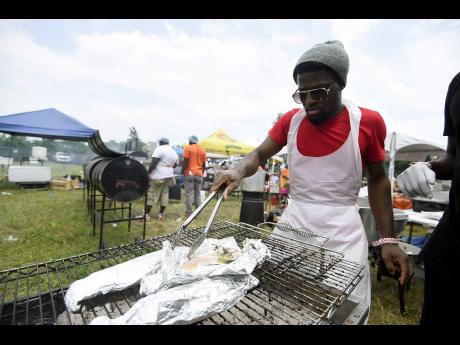 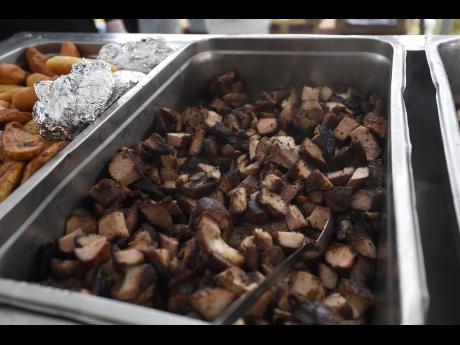 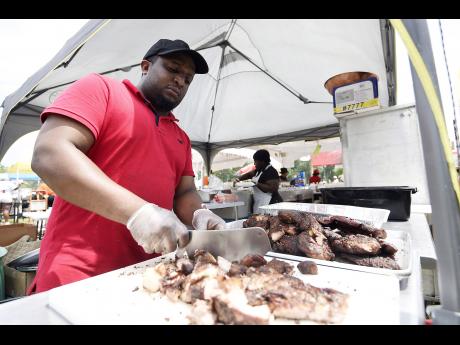 Mark Facey chops up a serving of jerk pork at Groovin In the Park Concert 2018 held at the Roy Wilkins Park in Jamaica, New York last Sunday. 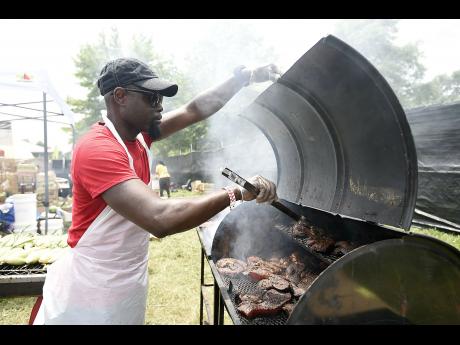 Delroy Moodie checks on the jerks pork being prepared for patrons at Groovin In the Park Concert 2018 held at the Roy Wilkins Park in Jamaica, New York last Sunday.
1
2
3
4

For first-time consumers of Jamaican food, the quickest and most familiar-sounding dish inside the food pavilion at Groovin' In The Park, held in New York last Sunday, was jerked chicken and roasted corn. The chicken, expertly seasoned with pepper, salt and herbs and charred to perfection, had patrons lined up from early, waiting for their piece of choice to be chopped and served with a picking of ripe plantains, festivals, and even hard-dough bread.

According to Percy Baxter of the popular Elmont and Laurelton-located Jerk Hut, it is a straightforward meal to recommend.

"The jerked chicken recipes have a wide range of spices that put them in the mood for more," said Baxter. "It is the first dish that had to be prepared by most chefs as soon as the stalls were set up."

The Door restaurant, title sponsor of the event, also had long lines of patrons consistently throughout the artiste showcase.

The only thing that was sometimes missing from the flavour was the taste of home-grown pimento wood, but being resourceful Jamaican chefs, many stall owners had substituted the firewood with another smoky, spice-filled tree when it could not be purchased.

One Groovin' In The Park patron, Alicia Brown, told THE STAR that the jerked chicken and pork took her back home to the Caribbean.

"Jerked chicken was the only dish I purchased more than once and mainly from the Jamaican-owned stalls," said Brown.

She and other patrons could be seen scattered around the Roy Wilkins Park devouring grilled chicken pieces.

"The one dish that does not fail is jerked chicken. We always make sure to recommend it because real jerk seasoning made from scratch brings a rich flavour that goes well with any side dish," said Baxter.