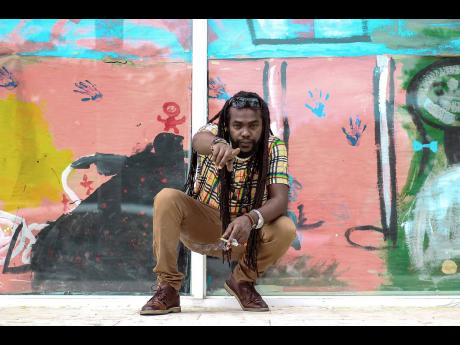 It is not in doubt that dancehall accompanies a persona, be it flamboyant, raunchy or self-important. While this may be entertaining for onlookers, reggae and dancehall singjay Flames Eye says the genre is suffering at the hand of "hype and ego", which he addresses on his latest song 'More Than A Pleasure'.

"It has become a culture, and we see it in everyday society, but I don't think it is a good culture," he told THE STAR.

"Dancehall has more to offer than hype and ego. People limit dancehall, but there is so much creativity. But many artistes lack that. Instead dem live off people's ignorance. A man will go on stage, knowing Jamaica is a homophobic country, and say: 'All a who nuh like gays put up your hand', playing off people's ignorance. I don't need to do that. I dig deeper and go for social commentary or something people are going through, which is lacking in the music."

More Than A Pleasure was produced by 8City GrimSmoke Productions and has already won favour among music lovers, according to Flames Eye. He added he was not fearful of offending any of his contemporaries, as he is just "saying it as it is".

Born Kemoy Ellis, the Clarendon native started doing music at 13 years old. He moved to Kingston to pursue a music career in 2008 and released his first single, Bad Dem a Hope, featuring Tony Joy in 2011. Though he mostly records reggae music, the artiste said that his musical journey has been tedious, as he does not conform to the unwritten rubric of attaining mainstream success.

"I am a very humble person, maybe that is why me nuh out there as yet 'cause according to dancehall you have to be doing or saying certain things, bleaching, wearing tattoos or doing something X-rated weh ketch eyes," he said. "Me believe I can make it 'cause I've seen others do it before without doing all of that. It might take a longer while and may be an uphill battle, but me love the challenge and we love music, so I will continue doing it."

Meanwhile, he hopes to release the singles Go Fi Weh You Want and Things Getting Out of Control later this year.