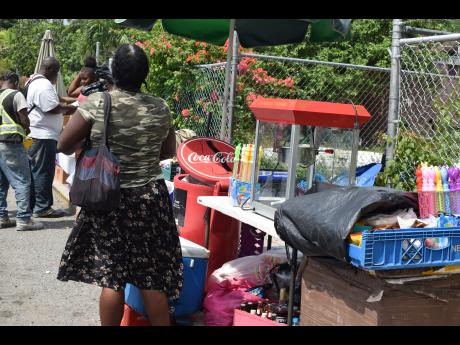 Vendors have begun to descend on the area around Emancipation Park in Kingston as they anticipate a massive crowd for Kanye West’s church service later today.

One vendor, Lolita Green, this morning said she sells outside Emancipation Park everyday, and finds it unfair that new vendors have come today and have taken over the area. Green and another vendor were involved in a heated argument over vending space earlier today.

"We a try vend and some crosses people a act like a dem alone wah sell, and me woulda like fi sell too. A sell me wah fi sell, and dem wah the boss (Kanye West) fi come from foreign come see seh Jamaican people a crosses,” Green said angrily.

Green said that she asked one of the new vendors to move her igloo so she could get an opportunity to set up on the pavement that rings the park, but did not get any cooperation.
"She nuh wah move the igloo…She wah me put mi stall beside di duty water and nobody nah go come inna nuh duty water fi buy nothing,” Green she in a loud voice.

Meanwhile, John, another vendor, told THE STAR that he is expecting a bumper crowd later today.  "Because of the show thing later, I have popcorn and I plan to bring hot dogs but I don’t know if I can do that here, because we heard about the show late so I can’t get the machine. I’m not raising no prices or anything like that, same price, but I came out early to make sure I have my spot, and I plan to stay until the show is over," John said.

Meanwhile, West, who once called slavery a choice, has been using his Sunday Service to spread the message of love and devotion to Christ. Today’s event is the first outside of the United States of America and is being held in a space that was established to pay homage to the fight of the enslaved people in Jamaica to win their freedom.

The rapper and his Sunday Service team are expected to transform the New Kingston venue with a praise and worship session of epic proportions. With his technical team already in the island from earlier this week, and West and his 170-strong entourage scheduled to arrive last night, the stage is set for the Jesus Walks singer to work his magic.