Little Lenny gives from his heart 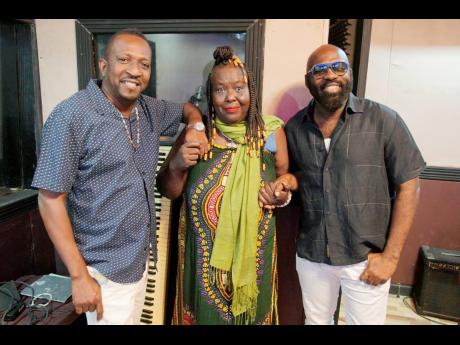 This Christmas is particularly special for deejay-turned-businessman Little Lenny, because of singer called Yvonne Sterling.

"I am so attached to this lady; she calls me 'Little One'. She's like my mother, she's the same age as my beloved sister and she's like my child," he said of the singer, who has faced challenging times and is now being given wings to fly.

Little Lenny, who does not hide the fact that at one point, he too was almost homeless, first met Sterling when he offered some financial assistance after she was flooded out and her plight hit mainstream media. Since that first meeting nearly six weeks ago, he has seen her numerous times and has spoken to her almost every day. He has now formed a bond with singer Richie Stephens, who also responded to Sterling's needs in a huge way.

He and Richie Stephens recently took her on a Christmas shopping trip, and that, too was fun. "I heard her whispering to the store assistant that she needed two of a particular garment. I told the lady to give her enough so that she can change all two a day if she wants," said Little Lenny.

"My mother lives overseas and I have not been able to see her since COVID, but I call her every day, first thing in the morning. She told me that she heard about what I am doing and she is happy," he shared.

The new song by Sterling, featuring Little Lenny and Richie Stephens, is titled Thank You Lord, and will be premiered this weekend. Little Lenny admitted that he was a bit nervous after having not recorded for so long, but it turned out right.

He said, "Every word in that song is true and it is touching. It says 'Thank you Lord for what you have done for me, what you are doing now, and for another chance to sing'. It also says that if each one help one, then better must come."