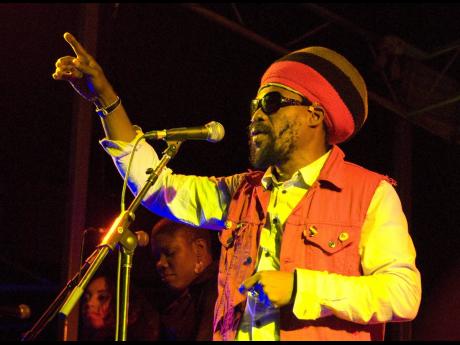 "There's so much going on in the world right now and this song is an 'upful' and bright reminder to keep Jah first in everything we do," the artiste explained.

This is one of the highly anticipated projects coming from the label since its recent partnership with Fitzroy Francis of Mightyful13 Records.

"I think this is a message that many people need. It's a reminder to keep your head up and remember that with Jah, you're never alone. So I hope it can reach the masses and help those who truly need it," said Mykal Rose. Big Feet Records' Josh Harris is also looking forward to the release of the track.

"It really is an honour to work with a legend such as Mykal Rose, the production was great and the track turned out really well," the producer stated.

Mykal Rose has had an illustrious career and is known for his time as the lead singer of legendary reggae band Black Uhuru, which he joined in 1977. The group's album Anthem won the first-ever reggae Grammy award in 1985. After leaving the group shortly after this achievement, Mykal Rose has gone on to release a number of albums over the years, such as Be Yourself in 1996, Warrior in 2007 and most recently, Ska Ska Ska in 2019.

"I have lots of works in the pipeline right now, live performances here and there, and still recordings songs for my upcoming album and singles," Mykal Rose added.