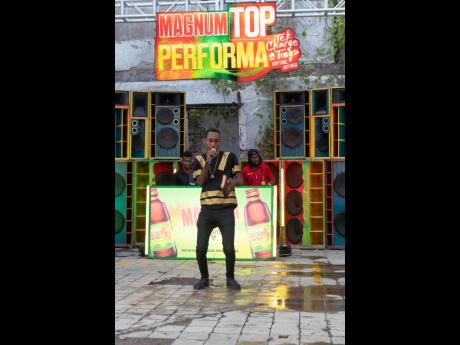 Next Thursday's final of the Magnum's Top Performa competition will be a royal affair, with King Calie and Prince Saj set to cross swords in their quest for the coveted crown.

Prince Saj, a Christian, booked his spot in the final after defeating Jase in the second semi-final this week. A week earlier, King Calie secured a berth in the final after lyrically out-gunning Tatik. The stage is now set for the prince and the king, two lyrically potent artistes, to duel in the Magnum arena. The clash will be aired on TVJ at 9 p.m.

"I'm just so excited and I can't wait for the finals," said Major.

"We had 16 artistes and now we are down to two, and these artistes have a lot of potential, so I encourage Jamaica to do right by them by voting and showing them support. They are definitely talented and based on the performances that I've been seeing, something big is coming to the dancehall space soon," he added.

The Top Performa will walk away with $1 million and a music video and song produced by Major. The second-place winner will receive $300,000 and a feature on a compilation rhythm from Major.

Prince Saj, a St Thomas native, plans to give back to his church and invest in his music if he wins the competition.

"It's a joyous and overwhelming feeling for me because I am now in the finals and I couldn't have made it without God first," the prince said.

With eyes fixed on the prize, Prince Saj said that he is very motivated to lift the crown, but stressed that his main aim is to win souls for the kingdom of God.

"Based on how the country is going right now, Jamaica is losing its spirituality and it's time for a revival," Prince Saj said.

"God has placed me here for a reason so that people can hear the Gospel of Christ. I am looking forward to reveal and show the power of God on the stage so that whosoever is out there that God wants me to reach out to, the message is going to reach that person or those persons, and they will start seeking God. For me, it is not about the money, it is about the performance, it is about love for Jesus Christ and it is about the message that I am going to bring and the persons out there that need to hear the message," the lyrical Christian said.

King Calie, who is from St Andrew, is eagerly looking ahead to Thursday's showdown.

"It's a beautiful thing when preparation meets opportunity, and you are actually awake to see it. Being in this competition is just what my career needed, and making it to the finals is validation enough for me. I fully intend to fulljoy every minute of it," he said.