Queenie and Dowey aim for official ‘Queen and King’ status 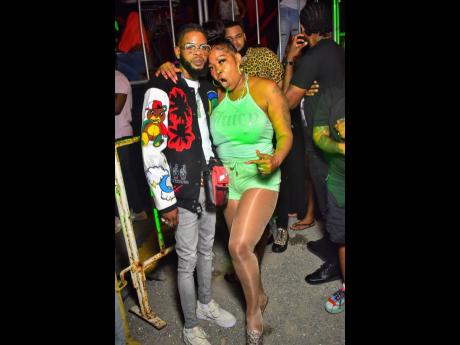 Trending dancehall personalities Queenie and Dowey have been sharpening their axes. After what the couple described as a "toxic summer", their focus has shifted to a routine and plan that they believe could benefit them in building a legacy.

"It was toxic, no other way to explain it, because me and me husband had our ups and downs ... me not even memba how the summer go," Queenie told THE STAR. "But the greatest thing is we are here together. We have to go through the fear fi get the faith. Me and Dowey see we mistakes and see where we go wrong [so] we a rebuild. We throw what fi throw weh inna di bin and a talk sense now."

Currently in Jamaica, the couple just wrapped shooting a few music videos and made time for nightlife, too. They made appearances at the birthday parties of fellow artistes Ding Dong and selector Shukkle Bus on the weekend and had patrons screaming in support of their union.

"We just a live and a make the best of life. We leave everything to God and time ... natural flow. You know me a queen and Dowey a my king, so we a manifest dah status deh inna di music," she said.

Queenie has released several solo tracks, including June Plum, Pop Up, and Queen Inna Deck. Together, they officially launched the June Plum Records label in 2021 and are now celebrating their latest single, a husband-and-wife collaboration. One Man To Mi Goodie has been trending on YouTube since the release of the video less than a week ago. It has garnered over 350,000 views.

Queenie, also known by her stage name Queen Ladi Gangsta, said she is proud of the song's success especially since it is a declaration of their love for each other. She also shared that she has a collaboration with Macka Diamond. The two dancehall divas have had their professional differences, but Queenie said they have long put that behind them.

Dowey, given name Dwayne Scarlett, said that to avoid "a stressful life", he is channelling all his energy into his wife and music.

"Instead of the constant stress-out vibes, we put everything inna di music. Me and her [Queenie] have another song a come Dah one deh a di hit ,but we haven't given it a title yet," he said.

While Dowey said they are not looking to collaborate with any particular dancehall artiste, the cards are on the table once "the artistes have good, honest energy".

He said: "I always took the music seriously as everybody always a tell me say me have a nice voice. Me a do dancehall. but me will also try drill."

Dancehall artiste Sikka Rymes manages the couple and is working with them to produce a full project, according to Dowey. There are also plans to release a song in memory of Queenie's late daughter, Sunitha Lamey as October 6 makes one year since she passed away. She would have been 34. Both Queenie and Dowey are slated to return to London for Lamey's memorial, which happens this Sunday, October 9.