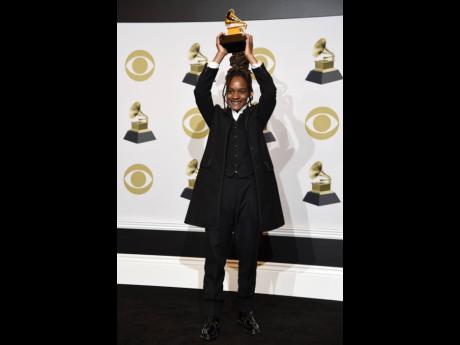 Koffee poses with the award for Best Reggae Album in 2020.

"I'm elated!" 22-year-old Mikayla Simpson, better known as Koffee, told THE STAR shortly after the announcement on Tuesday that her debut album, Gifted, had been nominated for a Grammy Award.

Gifted is the reggae star's first full-length album. In 2019, the then 19-year-old Koffee made history as the youngest and the first solo female reggae artiste to win the Grammy Award for Best Reggae Album with her debut project, the Rapture EP.

Released on March 25 via Columbia Records, the 10-track Gifted includes hits such as Lockdown, West Indies, Pull Up and Shine. There are no collaborations on Gifted, and Koffee explained previously that that was intentional because she wanted to focus on reconnecting with her own talent for this album.

The project sees her working with world renowned producers JAE5 and Frank Dukes and Jamaican breakout star Iotosh. Koffee not only showcases her vocals and songwriting skills on Gifted, she also produces half of the tracks.

On Tuesday after the nomination, she was focused on her team.

"My team and I put in a lot of work on this one so I'm very grateful that that is recognised," Koffee said.

She added, "I'm also super excited to be nominated amongst the likes of the great Protoje, Shaggy, Sean Paul and Kabaka Pyramid. Congratulations as well to all the producers who worked on this project with me -- I'm so grateful."

Gifted was one of five albums named in the Best Reggae Album category. The Kalling by Kabaka Pyramid; Scorcha by Sean Paul; Third Time's the Charm by Protoje, and Com Fly Wid Mi by Shaggy, also scored nominations.

Gifted, which sold approximately 3,500 units during its first week of release, debuted in the number two spot on the Billboard Reggae Albums chart and number nine on the Official UK Albums chart. Koffee was the first female Jamaican artiste in the Top 10 of the UK charts in 27 years, following in the footsteps of her fellow Spanish Town, St Catherine, artiste, Diana King.

Since winning her first Grammy award, Koffee has collaborated with heavyweight acts such as John Legend, Buju Banton, Protoje and Govana. Last Friday, British singer Sam Smith unveiled the track list of their highly anticipated album, Gloria, revealing that Koffee will be featured on a track titled Gimme. The album drops in January.

Koffee, who is also nominated for a MOBO Award for Best Caribbean Artiste, shared with followers that she has teamed up with Audible Originals series, Origins, to tell her story.

This airs on Thursday and there will also be exclusive performances from Koffee. Audible Originals markets itself as the largest producer and provider of premium audio storytelling with audiobooks and exclusive podcasts.