Topmann to unleash venom at Sting 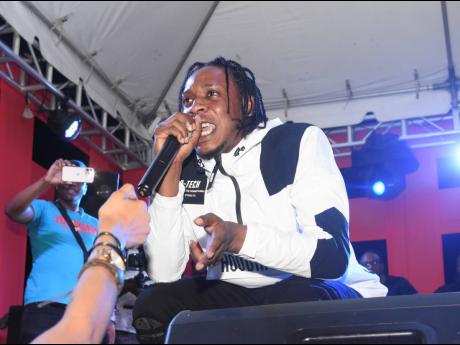 Dancehall artiste Topmann is preparing to unleash lyrical venom at Sting should he be required to defend himself in a clash.

The Choppa Lifestyle artiste, who hails from Montego Bay, St James, is among the rising stars booked to perform at the the December 26 event, which is slated for Plantation Cove in St Ann.

"I would be ready for a clash at Sting anyhow," he shared, though tight-lipped about who he believes his lyrical abilities could rival.

Sting stages have, over the years, come to be known as clashing ground for dancehall artistes. The show returns after a seven-year absence, and organisers have secured the bookings from the likes of Jahshii, Skeng, Silk Boss, Jada Kingdom, Lanae, Jahvillani and Valiant to perform at the event.

Topmann, known for songs such as Gyal Code, Choppa Lifestyle and Cash Ready, is looking forward to performing on the Sting stage for the first time.

"Fans should look out for an energetic performance," Topmann told THE STAR. "When it comes to Sting, even when I was not pursuing an artiste career, I have always stayed in tune to see the excitement, and even just by the name alone you can always look out for a buzz or something hot and saucy. I just want to bring my sting to it," he shared.

The 25-year-old artiste, who is a past student of The University of the West Indies, made his entry on to the music scene in 2018. In addition to turning in a dominant performance at Sting, he is looking to close out the year strong. The deejay plans to release a number of tracks to close out 2022 and is optimistic about his career for 2023.