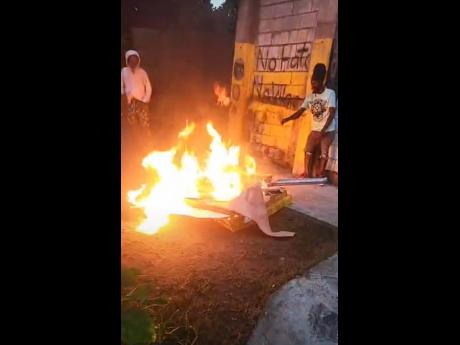 Screenshot shows Sizzla (right) and another man watching the fire as it burns the Billboard plaques. 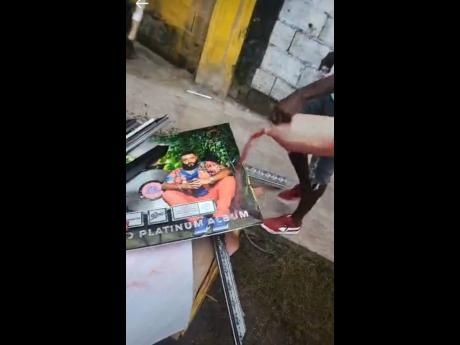 A liquid is poured onto the plaques which were later set on fire. 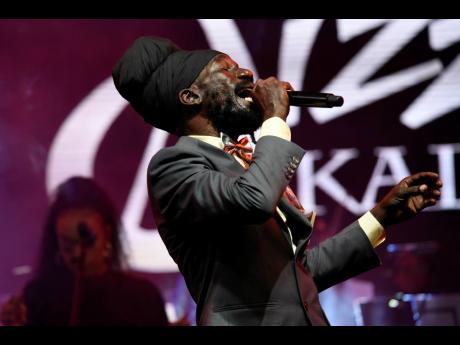 On Thursday morning at his Judgement Yard base in August Town, St Andrew, Sizzla literally burned the fire.

The reggae and dancehall superstar set Instagram ablaze as he recorded himself deliberately pulling apart, and hurling into a fiery furnace, two Billboard plaques which he received from DJ Khaled. The plaques, which are estimated to cost US$1,500 (approximately $228,000) each, were issued to commemorate the platinum certification of DJ Khaled's Grateful (2017) and Father of Asahd (2019) albums on which Sizzla appears.

Throughout the inferno, Sizzla's commentary revolved around an apparent lack of respect shown to him because his name was in fine print. However, music marketer Sean 'Contractor' Edwards told THE WEEKEND STAR that he believes the bonfire erupted because of money. He said that he spoke to Sizzla before Thursday's uproar.

"I can go on record and say it. It's money. [Sizzla] does not feel that he has been properly compensated for the work that he has done on Khaled's albums. Mussi bout three or four albums now him have songs on. Him seh nuh money nah come in of it. Him nah see nuh money offa dem song deh, him seh. So a dat mek him a blaze up di fire pon Khaled," Contractor said.

"Also, he doesn't feel like Khaled is giving him the level of respect that he deserves," Contractor added. The news team tried unsuccessfully to get a comment from Sizzla.

He continued, "DJ Khaled man yuh insult me man. You insult Jamaica. Everything a bun."

Interestingly, Sizzla is also featured on DJ Khaled's most decorated album to date, GOD DID, which received a Grammy nomination for Best Rap Album. Khaled picked up three nominations for the title track, for GOD DID [featuring JAY-Z, Fridayy, Lil Wayne, Rick Ross, and John Legend. The nominations are Song of the Year, Best Rap Song, and Best Rap Performance.

Capleton, who is also featured on GOD DID, told THE STAR shortly after the Grammy nominations were unveiled last month, that "it's always attitude with gratitude".

"It's always a great feeling, but it's not a swell-headed thing. I've been there before ... been on a lot of album that was nominated for the Grammys and a lot of albums that actually got the Grammy. Want to big up everyone that is a part of this project, GOD DID and all the artistes for the hard work ethics. Big up Khaled."