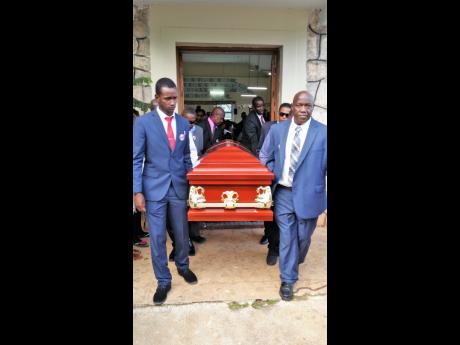 Pall-bearers carry the coffin of the late Margaret McFarlane outside the Bethany Baptist Church following the thanksgiving service.


It was a huge turnout of mourners at the Bethany Baptist Church in St Ann recently, as persons from near and far crammed that church to pay their last respect to Margaret McFarlane at a thanksgiving service, following her passing on November 5.

McFarlane, who was born on March 2, 1939 to parents Sydney Adams and Tamazina McLeod, was remembered as an individual who was always going to church and who always ensured that her family members were also in attendance.

This was revealed by McFarlane’s niece Patricia Adams, who was among those paying tribute.

Pastor Albert Bailey, while paying tribute to his mentor, said McFarlane impacted his life positively. Bailey added that some years ago he did not know the Lord and McFarlane opened her doors to him.

He said she was known to be on fasting religiously every Monday and it was due to her prayers 35 years ago why he came to know the Lord.

“Her life impacted many lives. She spoke life into me. She loved me like a son, and she was a straightforward woman,” said Bailey.

McFarlane was described as a good neighbour, a woman who had a strong personality, and a good motivator.

These words were said by Audria Brown. She added that the deceased was known for numerous acts of kindness.

“She was a mentor and an adviser.She was a woman of substance who wanted everyone to serve the Lord. She taught me how to be independent. She was a strong disciplinarian and a great cook,” said Brown.

Mourners were told by deacon Eulick Frater during his tribute, that McFarlane was a no-nonsense individual who was caring and independent as a good family woman.

She was also remembered as the mother who ensured that her children attended school. Mourners also heard that the deceased was one who did not encourage lateness.

Paul and Marc McFarlane, while eulogising their grandmother, also said she was a caring and strong woman who took good care of her family, one who was easily described as a workaholic.

They said their grandmother, who attended the Bethany All Age School in her community, was a most punctual student.

“Grandma ensured that her children acquired a good education and that they grew up in the right way,” said Paul.

Delivering the sermon, Pastor Melbourne Powell reminded mourners that death is certain and it is a step which all must take. He said all need to make preparation for this step, as “no one knows when their step will be taken."

No one will miss this step ... Margaret McFarlane spent her years preparing for her final step,” preached Powell.

Her body was interred in the family plot at Rosetta, St Dacre, St Ann.
Feedback: pehenrya@hotmail.com