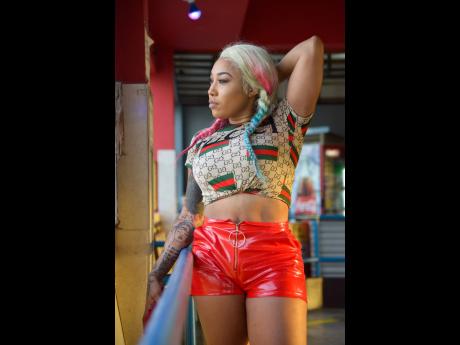 Ask some female artistes about the current atmosphere among their peers and you’ll probably hear something about women empowerment. But is that the reality or all for show?

Star of the Month Shauna Controlla believes rifts exist among some female entertainers who are caught up chasing the usual trajectory charted by male artistes.

“You have love and respect behind the scenes, but I feel like the females too much focused on following the men footstep, that’s the issue weh mek dem waan clash against dem one another,” she told THE STAR.

“The men used to clash before fi get inna di music industry and lately, it has changed for the men, and I think the table a turn fi di woman dem. I feel like dem (women) need to work together more and stop focus pan weh dis one a do or who a drive this or who has that, ’cause that keeps them distracted.”

She maintains that she avoids the drama by staying in her lane, but added that this can prove difficult when fans or Internet trolls pit artistes against each other.

“Some artistes will work with hear seh. Dem listen weh John come tell dem seh Tanya seh and run gone have up Tanya, and Tanya never did a chat yuh, a John just mix-up. A suh dem stay, dem will set you up ‘gainst each other. Me have couple people a try set me up with other females, a tell me and dem fi war, but me nah focus pon dat ’cause me different from everybody else and there’s a lot of space for everybody.”

Ignoring the noise is what she did last year when fans sought to stir a dispute between her and Miss Chin (KipRich’s babymother), after the latter claimed sole rights over the name ‘Chin’. Shauna explained the two were always cordial until she apparently rubbed Miss Chin the wrong way.

“Is a catty weh always hail me and me hail her back, and she ask me fi come do mi nails ’cause me think she do nails, but ’cause me busy and nuh memba, plus me have an original person weh do me nails already, me seh mek me stick to the evil weh me know. Me never go do me nails, and from that she get corrupt. She left message a gas station fi me, she left message a studio, all over the place, seh a fi har name Chin. Girl, yuh have so much Chin in the world: Miss Chin, Mr Chin, every Chiney woman name Miss Chin; so me no know how yaa go war over me ’bout the name, so me just change the spelling.”