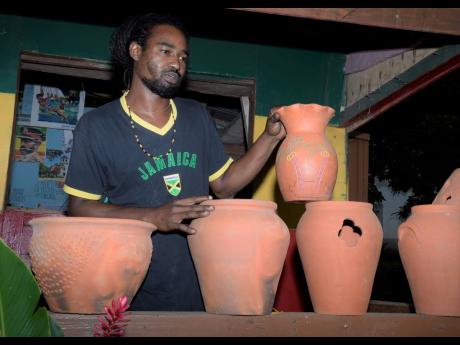 Errol Crosby/Photographer Wise has a variety of clay creations for sale. 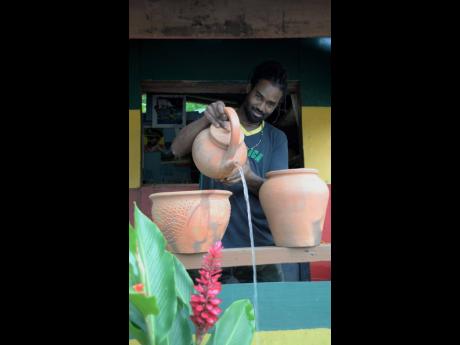 Wise shows one of his clay watering pots.
1
2

Pottery is a gift that 37-year-old Itamar Wise said he inherited from his father, with whom he grew up.

“When I was a child, he worked in pottery so mi grew up inna it, working and playing in the clay,” he said.

But it wasn’t something that he would embrace at first.

“Mi always try fi explore other jobs. I worked in a restaurant doing baking. I tried working on a construction site for a couple of years well,” he said.

Now, Wise said he has learned to enjoy the satisfaction that he gets from accepting his talent.

“Making pots come een like pleasure. It’s my living but I enjoy making these nice clay pots, and mi just wah fi just continue and do the good work I’m doing, and try to evolve more, and do more nicer and exotic pieces,” he said.

From his shop on Trinity main road in the Melrose Hill area of Manchester, Wise has been selling his creations for six years.

He told THE STAR that he sources the clay from Manchester and Clarendon, and moulds his pottery right at his shop.

“When mi get the raw material, mi try fi wash it and extract the stones, roots and ‘rough rough’. Then mi mix it wid loam because the clay alone would be too strong, and then mi get it into the texture that mi want. I do this with my hands, no machine. I just use the natural coiling method, meaning me do the spinning around something like a stool. The vessel itself don’t move, just the stool,” he said.

He added, “After that the pots dem would be room temperature dried, and then them go outside in brick oven for it to be cured.”

He said his customers are mainly people who drive by his shop, and who are attracted to his designs.

“I get my sales, and passers-by always want something custom-made. They take a picture to me and I make it off of the picture,” he said.

However, Wise bemoaned that business sometimes can be slow.

“I wish it could be better, but the economic system weh a run inna Jamaica right now, years gone by things would be different. But mi nah complain because mi can eat a dinner and mi nuh haffi a really stress miself too much,” he said.

But he’s adamant the trade will not die with him.

“I have a son on the way, due next month. And it’s a very special moment in my life, and I’m looking forward to being a good father and a supportive father, and it’s a skill I want to pass on to my son too,” he said.