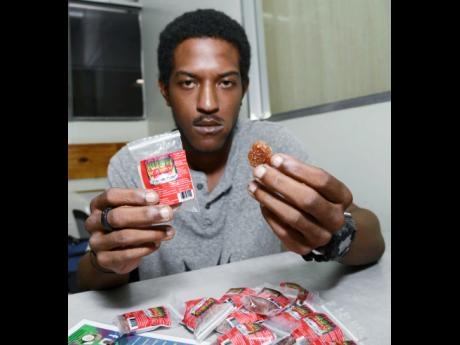 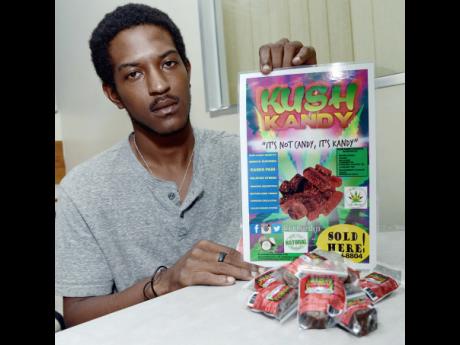 A university dropout has turned his passion for weed into a business and is now seeking to get Jamaicans and foreigners high on candies.

But this is not any ordinary candy. This is weed-laced candy, which contains cannabis oil.

Its manufacturer, Jared Wright, was in his final year of his Bachelor of Law degree at the University of the West Indies when he decided to drop out in order to pay attention to his business.

The product retails for $200 per bag. Each bag contains three candies. Wright told THE WEEKEND STAR that his biggest market is the 18-25 age group, but he sells to persons between 18 and 65.

On the packaging, Wright claims, among other things, Kush Kandy provides smooth euphoria, eases pain, relieves stress, removes indigestion, soothes sore throat, improves circulation, and builds the immune system. "We don't use a lot of weed in the candy, so it doesn't give you a high like smoking but a nice high," he said.

According the Campion College alumnus, the reception to his product has been positive. "I have a lot of repeat customers because persons like to get high. Everyone likes to get high so why not do it like this," he said.

The entrepreneur, who started using ganja at age 15, has plans to expand and export his product. "I want to get more flavours and I want the ganja candy to export into countries such as Holland, which has free laws on ganja," he said.

Wright's venture into ganja market comes against the background of the decriminalisation of the drug last year. Under the revised law, persons are allowed to have up to two ounces of marijuana for personal use. A framework is also in place to allow for persons to possess marijuana for medical, scientific, and religious use.

Wright is convinced that his Kush Kandy business is not in violation of the law. "The Dangerous Drugs Act defines ganja as the plants, roots, stem and buds, right. It's not in the definition of ganja, it's not a component of ganja and is excluded from the law," he argued.

However, one former government minister has opined that Wright may be mistaken. The former minister, who asked not to be named, said the cannabis oil, the ingredient which Wright utilises in his product, is included in the Dangerous Drugs (Amended) Act.

The law defines ganja as including all parts of the plant cannabis sativa from which the resin has not been extracted and includes any resin obtained from that plant.

Meanwhile, Dr Winston De La Haye, a consultant psychiatrist specialising in addiction psychiatry, cautioned against consuming products such as brownies and sweets that are made from by-products of marijuana. "We have to be careful not to allow edibles such as candy because when it gets into your bloodstream, it can be problematic and cause conditions such as acute psychosis," said De La Haye.