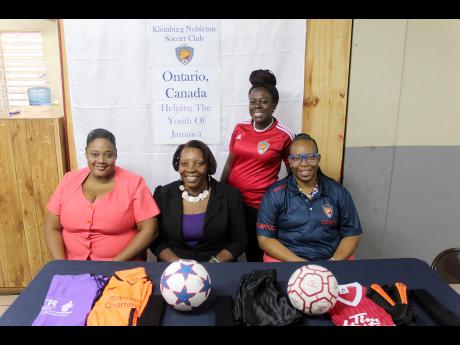 In the midst of Career Day, the football club and team members at Providence Methodist Early Childhood Institution were last week gifted with gear from Kleinburg Nobleton Soccer Club (KNSC) of Ontario, Canada.

The school's principal, Catherine Smith-Gayle, said that the donation could not have come at a better time.

The football team, formed in 2014, is comprised of students from pre-kindergarten to upper kindergarten from four and six years of age. They acquired the title of Zone 4 champion for a six-a-side competition at the basic-school level in 2016.

"We have been seeking sponsorship for the team, especially with preparations being made to compete in the competition again in May," she said.

Winston Richards, senior coach and member of the Canada-based organization, is enthusiastic about the donation, especially because it is a means of giving to the future of Jamaica.

"With my affiliation to football and KNSC, which is focused on helping the youths, it was a no-brainer," Richards said.

The overseas club has donated gear to other schools in previous years, but the cause is getting bigger.

Richards also said that he intends to return to the source of his early education and exposure to football, Frankfield Primary and Infant School in Pratville, Manchester, to assist with the football programme.