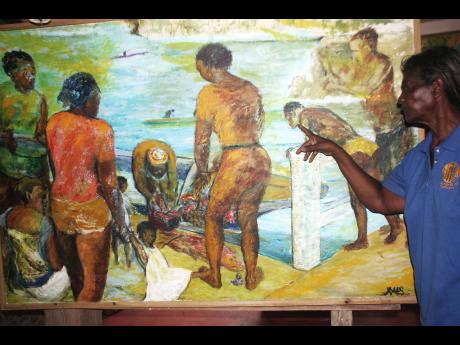 Joyce James points to one of the pieces of art in the gallery. 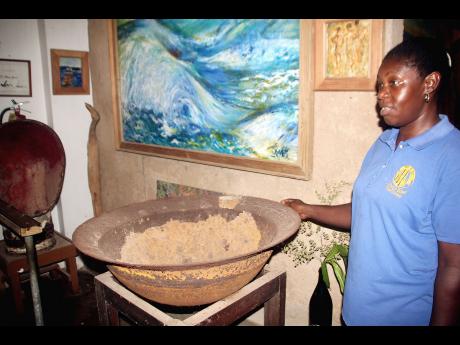 With a love for art and a growing collection, 52 years ago Joe James decided to open the Joe James Gallery on a property he bought in Rio Bueno, Trelawny.

Joyce Burke, Joe James' widow, said: "At first, it was a casual display, and then visitors started to pay an interest, so Joe decided to open the gallery. The pieces of art done on canvas and sculpture made from cedar and mahogany gained special attention, and the gallery became an important existence in Rio Bueno."

According to Burke, after a while visitors started asking for something to eat, so another idea was born.

"Joe was a man with eyes, always open to opportunities, so he decided to open a restaurant. He wanted to be different and specialised in seafood. This gave birth to 'Lobster Bowl'," she said.

She added that the gallery got visits from tourists, schoolchildren and the general public because they also wanted to see the pieces of memorabilia from the days when sugar was king in Trelawny.

"Rio Bueno is a quiet community, and the gallery is situated where people can sit back, relax, and enjoy the cool breeze coming from the sea. People wanted to hang around for the art display and the food and tranquillity that the gallery offered," Burke said.

And, although the founder is dead, Burke is confident that the business would not die.

"The gallery will always be there. It does not matter that pieces are sold. A number of Joe's 10 children dabble in art in some way, so there will always be replenishing," she told Western STAR.