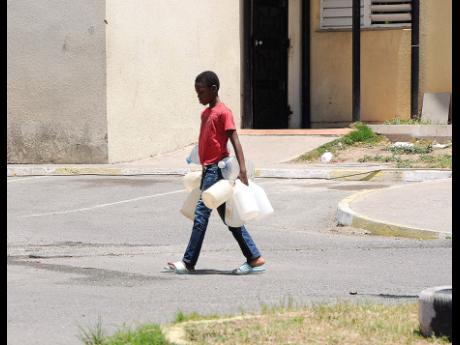 This young man carries bottles to a nearby pipe in Zimbabwe in Arnett Gardens, St Andrew, to fill them with water.

Some Arnett Gardens residents say they have been without potable water for quite some time and are imploring the relevant authorities to correct the situation.

According to those living on 10th Street, more commonly known as Zimbabwe, their pipes have been unused for years and they are forced to carry water from nearby avenues.

"A long time we no see water inna dem ya pipe ya. A bare bath pan we bathe inna, and it no look good fi see big man a bathe inna basin. More time, a way round the road me have to walk go catch likkle and when you go, sometimes is a big line me buck up inna," a Zimbabwe resident said.

Similar sentiments were echoed by a woman who said she has to do her laundry in another community.

"About three or four months me have to take taxi with me and me pickney dem dirty clothes go wash dem a me friend yard a Waltham. It really bad man fi see say a bare nice house all round ya and we have di fancy bathroom dem and caan get a good shower out of it," she said.

Member of Parliament for St Andrew South Mark Golding said he is aware of the situation and is in close dialogue with the National Water Commission (NWC) to resolve the matter.

"NWC has confirmed that the water pressure is low and that Hermitage Dam is 27 per cent full and there are some distribution issues as well, so they will be trucking water and so on," he said.

He admits that Trench Town and surrounding communities have been suffering from water issues for a few months.

He stated that the pressure is very low and some days, there is no water in the pipes at all.

"For example, Trench Town Police Station has a reserve tank which they have to be using because there is no water in the pipes most of the time. The tank can't even be filled from the main because the pressure is so low, so the water has to be trucked in order for their tank to be filled," he said.