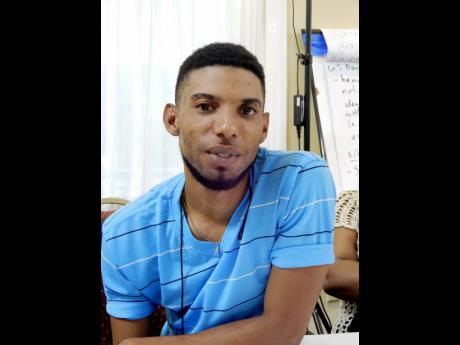 Life hasn't always been easy for 25-year-old Ronald Hall. Throughout his teenage years he struggled with his identity.

Hall, who was born in Kingston and relocated to Sangster's Heights in Chapelton at an early age, attended Clarendon College.

After leaving high school, he was confused about who he was and what he wanted to do.

"I portrayed several images, trying to fit in, trying to find a place in society, always feeling like the odd one out," he said.

For a few months he would sport long hair, then he would switch to cornrows, and soon it was processed. Although he is naturally of fair complexion, Hall would even use bleaching products. He explained that his self-confidence got even lower because relatives told him that he couldn't do anything.

Hall would have probably continued on a negative path had it not been for a bit of advice he got from a man, who he only knew as Ker. When he met the man in 2016, he was encouraged to join a police youth club and invited to the meeting where they were choosing persons to form the committee.

Hall was the clear favourite to be president of the club, something that surprised him.

"I didn't have anyone to really talk to about my identity crisis and what I was going through. But after being the president I realised that I had purpose, value, leadership qualities, and I was taking charge doing things, engaging youth participating in activities. I started to set objectives and goals," Hall said, adding that the accomplishment was a confidence booster.

"The police youth club has helped me to shape my life. I now know who I am. I started taking part in other social activities."

Since being part of the youth club, Hall has volunteered to be part of several groups, including the Youth Information Centre, National Youth Service, and various committees.

With a different focus, Hall decided to attend evening classes before doing a few courses at The University of the West Indies Open Campus in Clarendon.

Now that he is on a more positive path, Hall wants to help misguided youngsters.

"Being involved can make a big difference in your life. It helps you to identify your strength, your value and purpose. It builds your self-esteem and creates opportunities. I am now working at a boys' home as health and social care worker, where I share my story with the boys and try to help them in that way," he said.