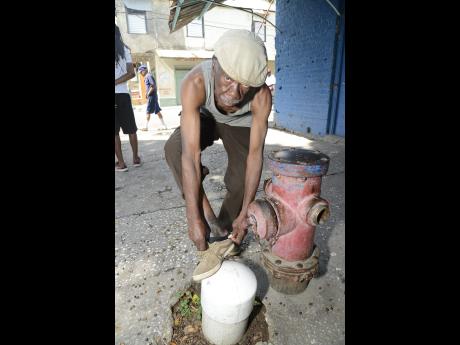 Conrad Graham was hot in his ankle after he got caught in a crossfire between police and armed thugs in 2003.

Conrad Graham sits with his daughter Andrea and two other neighbours along the sidewalk on Fleet Street in downtown Kingston. His wandering eyes landed on the zinc fence that encircles his house, and a thousand thoughts appear to run through his mind.

Graham, 73, told THE STAR that he was earning a living as a mechanic up to 15 years ago but had to stop working after he got caught in a crossfire between police and armed thugs in the community.

"Mi get a gun shot inna mi foot and it mash up mi ankle bad bad. All now it still hurt mi. Mi used to do mechanic and messenger work, but mi can't do it from it mash up. I can't tell if a police bullet catch mi or not, but mi just never get no help at all," he said.

Graham told THE STAR that his chances of taking better care of himself lies in a government pension, but said he is having major issues collecting it.

"Mi suppose to get some NIS money, but every time mi go up there mi hear say mi need to have a bank account. Mi nuh have nuh money to open an account right now. Mi don't even have a phone. Mi just deh here as a big man, sit in. Sometimes mi get likkle hussling, but it no do much," Graham said.

Diverting his attention again to the broken-down zinc fence that surrounds his home, Graham said he yearns for a better place to call home.

"Mi house is a board house and mi did always plan say mi would put up a concrete structure. Mi really hope somebody can help mi buy likkle material. Mi is a hard-working man, enuh. A just the shot slow mi up," he said.

"Right now, mi madda sick and loose her two foot a Sligoville, and mi can't even go where she is too regular because mi nuh have it to give her, and mi can't depend on her to mind mi as a big big man," he added.

Persons wishing to assist Conrad Graham may contact his daughter Andrea at 876-864-9359.