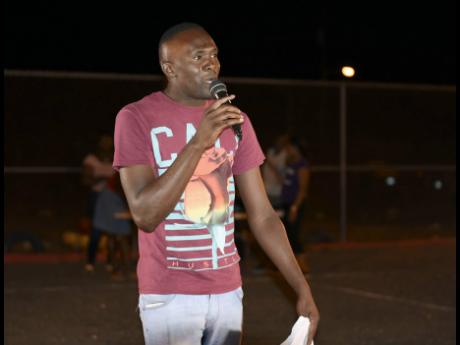 Travis Malcolm has one of the most recognisable voices in the community of Siloah, a district in northeast St Elizabeth.

He has become the most widely known master of ceremony (MC) in the area.

Although he does mostly community events, such as birthday parties, concerts, beauty pageants, and sporting events, he has a bigger dream.

"I would want to be at least a stadium announcer one day," he said. "That would be something of a dream, and even if I don't get that, but something close."

When asked if he believes he can make a living from this line of business, Malcolm said: "Only if I get work five to six days weekly."

Malcolm, who describes himself as a charismatic person, explained that the journey to being an MC began several years ago while in high school.

He was the Inter-School Christian Fellowship group president and led other groups such as the choir, revival club and TOQC (Travis, Oshane, Querone, Christopher), an a cappella group. He was also involved in speech and drama.

"I used to host devotion at Maggotty High School every Friday morning," he said, noting that this was the first break given to him by the school leaders.

"Many persons always tell me I need to venture into journalism, because they see where I have a gift to push further than just being an MC," added the former Maggotty High deputy head boy.

The 27-year-old man said that Maggotty High School has set the stage for him to excel.

"So that experience then, back in high school, has helped me now to be better and get deep in what I believe in," he said.

Malcolm, who is now the regular MC for several of the school sports day in the community, is happy with the recognition he has been receiving.

"Many persons speak well and even said I shouldn't be here; I should be at a higher level," he said.

"A gentleman who was here in Christmas and attended a concert I hosted told me: 'You know that if you were in Great Britain right now you would leave a mark, because it's persons like you they want."

With much encouragement coming from various persons, Malcolm said that he hopes he gets the necessary support to help him move forward.