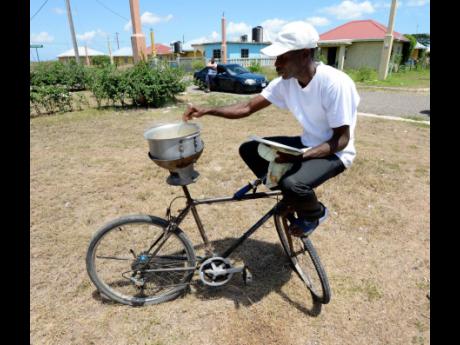 Ian Allen/Photographer John Dennis shows off his cooking skills on his bicycle in Springfield, Clarendon. 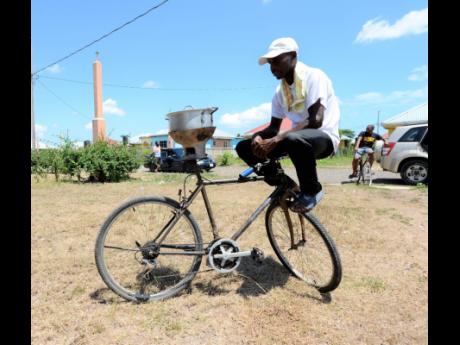 John Dennis awaits the landing of his boat.
1
2

It is safe to say that John Dennis is a celebrity in his Springfield, Clarendon community. The 39-year-old has been cooking up a storm on his bicycle, doing so while balancing it on both wheels.

Dennis's skills we brought to the fore after a video of him cooking on his bicycle went viral a few weeks ago.

"Mi even cook on my house top on the bicycle, and it don't deh on the stand. Mi just know how to balance," Dennis said.

When the CENTRAL STAR visited Dennis in his community last week, his curious neighbours left their homes and converged in his yard to watch as he pulled off yet another cooking stunt.

Dennis then proceeded to show off his cooking skills to the news team as well as his excited neighbours, who cheered him on as he placed the coal stove on the back of his bicycle. Like the video that went viral, the farmer's stunt did not started out as planned. He lost his balance and the stove, with hot coal, went flying minutes after he placed it on the cycle.

But that did not dampen his mood. Dennis quickly regained his composure, reset the coal stove on the back of his bicycle and then proceeded to cook a pot of rice.

There were no more mishaps as he confidently sat on his bicycle for another 20 minutes and set about preparing his meal.

As soon as the 'boat landed', the crowd cheered as Dennis removed his pot of rice and took it inside his kitchen.

He told CENTRAL STAR that while his passion lies in his farm, he is open to showing off his unique skills at entertainment events. He also added that since the video went viral, at least one unscrupulous person has cashed in hundreds of thousands using his name.

"A family member called me to tell me that they heard that I had collected money. She even told me she saw in on the Internet, but I want to clear my name because I did not receive a penny from anyone regarding the stunt," he said.

"Mi nah tell no lie, mi never expect the video to get so big and all people a call mi from overseas to say if mi deh a farrin, mi would a get a lot of money for my stunt," he added.

The Springfield resident has a kitchen with a functioning stove, but Dennis felt compelled to pull off crazy cooking stunts after he developed the skill to balance his bicycle in ways people have been unable to do.

"I used to go to football match and sit on the handle, but sometimes when the people dem stand up in front a me, I would stand up on the wheel and people use to wonder how mi do it, and the bicycle not on any stand. Sometimes dem all forget about the match and start watch me," he said.