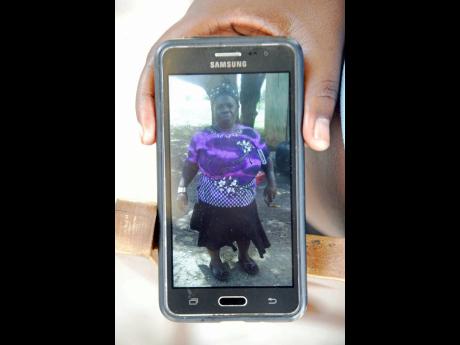 Akelia Nelson shows a picture of her mother, Patricia Harriott, on her cell phone. 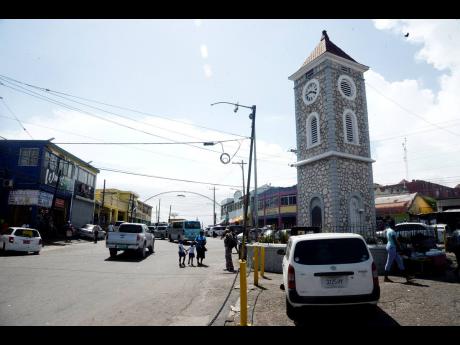 The square in May Pen, Clarendon.
1
2

Upon seeing the news team, Akelia Nelson broke down in tears. She said that the past week has been extremely difficult as she is still trying to come to terms with the brutal slaying of her mother.

In addition to mourning her mother’s death, the 23-year-old said that she has to be clearing the air and refuting the numerous rumours and speculations about her murder.

“I am 23 now, and is before mi born mi madda a sell a May Pen. She never do a soul anything. Everyone knows her. People a talk all kind a tings a say she have a son who inna badness so a that’s why she dead, but mi a di only child for mi madda. Dem also a say she may have seen when the robbery gwaan inna May Pen, but my mother nuh sell on Sundays. She either go church or stay home. She never see or say anything,” Nelson said.

Patricia Harriott, 66, a vendor of Cornpiece, Hayes, in the parish, was shot and killed during a brazen daylight attack on Monday, June 3. The May Pen police say that about 5:20 p.m., Harriott was sitting at her stall in the town centre when she was pounced upon by a man armed with a gun, who shot her several times before escaping.

Staring at a picture of her late mother, Nelson said that ironically, the last conversation she had with her had to do with an upcoming funeral for a relative.

“I just left her at the market. We were discussing plans for an upcoming funeral for a relative, but now I have to be planning hers. I left her and told her that I was going to cook. When mi a cook, mi uncle say if mi hear say mi madda get shot, so mi say no. Afterwards, mi phone start ring, and people start tell mi say she get shot but she never dead. Afterwards, mi hear say she dead. All now mi can’t believe,” she said.

With tears streaming down her face, Nelson said that her mother’s death has shattered her heart into pieces as she never once imagined that she would face such a brutal death.

“Mommy never inna mix-up yet from mi know her. She was hard-working, and sometimes all 4:30 a.m. she wake up and do her little chores and would go in her garden go plant her little tings dem. She ever a find something to do, and she never nuff up in anyone’s business. She was a very good mother, and mi don’t know how mi a go go on without her,” she said.

Similar sentiments were echoed by Harriott’s brother, Livingston, who described his older sister as a good person.

“Pat was a good smaddy, and mi feel bad say she dead, God know. Sometimes mi a eat, and and as soon as mi remember it, mi appetite gone. A the night before she dead mi trust a Pepsi from her and tell her say mi a go pay her the Monday, but mi never get a chance to see back mi sister alive,” he said.

A vendor who was in May Pen when the shots rang out last Monday said he was shocked when he found out that Harriott was the recipient of the bullets that sent him running for cover.

“Mi sell across the road from her, and the day when mi hear the shot dem, everybody run off. When mi look back and see say she sit dung in the chair same way and she nuh move, mi know say something wrong and a must she get shot,” he said.

Another woman described Harriott as a helpful individual who would willingly offer to keep persons’ bags at her stall while they shopped.

“She was a very helpful woman. Just a few hours before she was killed, I had purchased bread at a bakery and gave her the bag to keep for me. She dead with the bag beside her. Persons are saying that they probably mistake her, but how could people be so wicked? No one else looked like Pat. She has been selling there too long for anyone to mistake her for anyone,” she said.