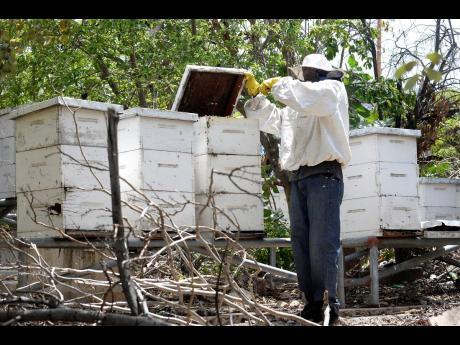 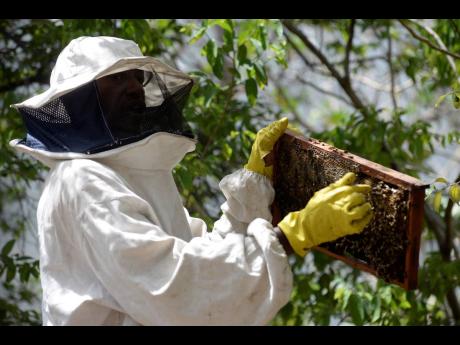 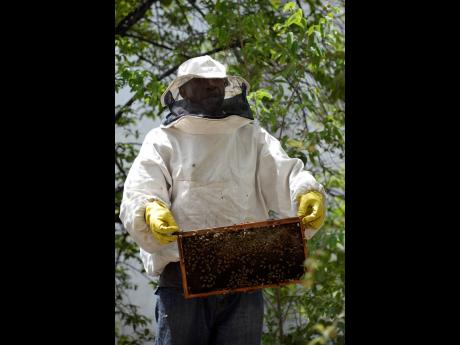 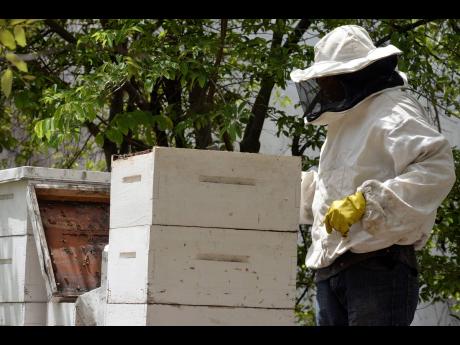 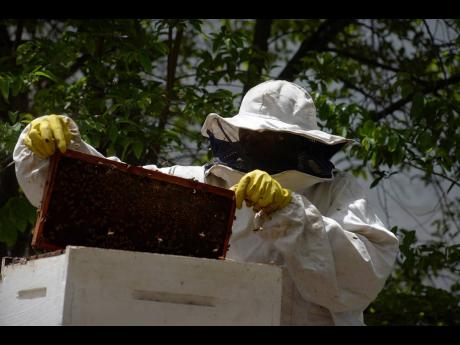 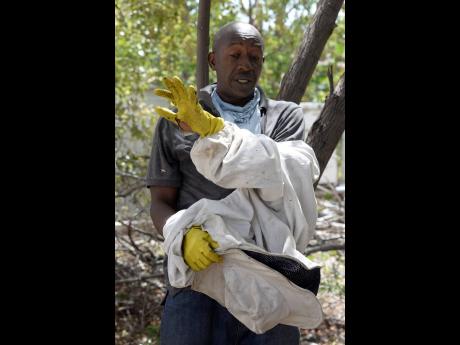 Geoffery McKoy, the overseer for an apiary owned by the Greater Brown’s Town Community Development Council in Franklin Town, Kingston.
1
2
3
4
5
6

Beekeeping is often placed in the same box where the 'easier' farming activities are kept. This is because it's considered to be less labour-intensive, and consumes less time. But any beekeeper will tell you that it takes great skill to operate a successful apiary. Not to mention that one has to increase his/her pain tolerance level to deal with the evitable stings that you'll get.

Geoffery McKoy, the overseer for an apiary owned by the Greater Brown's Town Community Development Council in Franklin Town, Kingston, knows this all too well.

"Sometime I go in and get sting. It's not an easy task at all, even the other day I was here, and a bee was on my eyelid, and if he sting mi the day would have done," he said, while demonstrating to THE STAR team how he gingerly removed the honey bee before it got the opportunity to sting him.

But he grudgingly admitted that he's not always that lucky.

"I get sting sometime that I have to run outta there, and kinda have to gather myself until the burning stop, then I go back and do what I have to do," he said

The apiary has 30 colonies of bees. It was part of a project initiated by Veda Fagan and other community members in 2007, when the community was going through a period of unrest and was trying stimulate peace.

McKoy has been the overseer of the apiary for the past seven years. He told THE STAR that it was a role that he seamlessly fit into after doing odd jobs around his community.

"I used to do little welding, I worked on construction sites, and I worked for two years as a security guard at a school in the community. If there's 'chopping out', if the fence need fixing, I do it. I extract the honey too, three times a year," he said.

He said that working in the apiary is something he is doing for the love, especially since he's only paid a stipend of $10,000 per year for his overseer duties.

"It's the commitment that makes you continue, and you're already in, so you just play your role and do what you can to make the project continue," he said

McKoy shared that it's also a gateway for him to branch off on his own.

"Doing this is a learning process to go on my own. I see it as something that could be profitable to me. It's something that even having a job, you can still maintain your farm, because it's not something that you have to be doing day in, day out; it's not pressuring," he said

And although he's not the one primarily responsible for the sale of honey, when he does, it's to his community.

"I sell, but Miss Fagan sells at a greater volume and price. Sometime when I sell it, I sell it fi all $2,000 (per quart), because people tend to be saying, they know you, and you live in the community, so you can't sell them for that price, they even want to go less than that. I have to tell them that we need to buy back stuff, and it's a registered business, so we can't just give it away," he said

McKoy said he wants to get more people involved in beekeeping, but this is a little challenging.

"We try to recruit people in the community to come on board, but we haven't been successful; most persons are scared of the bees," he said.