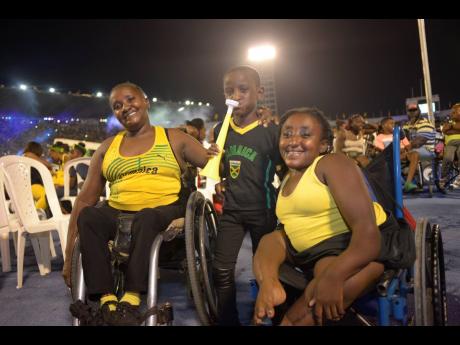 It was a family affair for 23-year-old Sasha McKane, her four-year-old son and her mom Paralympian Vinnette Green, who all came decked out in their national colours to celebrate Jamaica's 57th independence at the National Stadium yesterday.

McKane, like her mother, has to use a wheelchair, and she admitted that she encountered difficulties to get to the venue.

But she said that going to the Grand Gala is a tradition that her mom started, and one she wants to continue.

But travelling from her home at the Sir John Golding Rehabilitation Centre in Mona wasn't easy.

"Mi try tek a taxi or a bus a year time. But a nuh every bus or taxi wah carry yuh. Di one dem weh carry yuh wah charge yuh $400," she said.

But nonetheless, she said that she had to be there.

"Mi haffi support Jamaica, plus mi love the entertainment, the music and meeting new people," she told THE STAR.

Both Green and McKane compete in 5k events in the island.