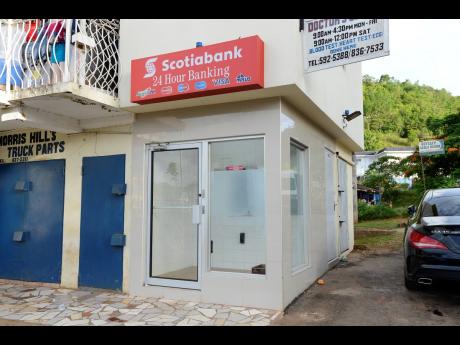 The only ATM machine in Alexandria, St Ann, that serves several communities, is constantly out of use.

The excitement with which the people of South East St Ann welcomed their first Automated Teller Machine (ATM) more than three years ago is now being replaced with annoyance.

According to the residents, the Scotiabank machine, which is located in the town of Alexandria, hardly works.

Because of that, they believe that the area needs another one.

"It down more than it up, it more of an inconvenience. Wouldn't mind if uno put it pan a chain, and draw it out," one customer told THE STAR.

"Mi can neva get money out deh. If it fix today, by tomorrow it stop work," said another user, who went to use the machine and then realised it was out of service.

He said the situation has got worse since the reopening of the Noranda Bauxite plant in the parish.

"Through the bauxite company open up back, is a vast amount a people a work, and most a di money come through the bank. And when dem come a di machine, no money. Dem need fi put in one more," he said

Christopher, a market vendor, said he often loses customers because of the machine being out of service.

"When dem go a di machine, no money nuh in it. From dem seh di machine nah work, down ya suh empty, everybody gone a Brown's Town," he said.

Janet, who works in the town, reiterated that another ATM is needed.

"It was a good move, but one more would be better. By time di truck come wid di money and gweh, money done," she said.

THE STAR reached out to Scotiabank and a representative said that the financial institution would respond in short order.