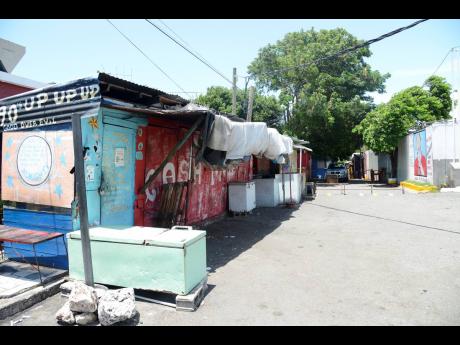 The spot where Oneil Grant and Beverley Brooks were killed early Saturday morning.

Her son, 37-year-old vendor Oneil Grant, was returning home from a party early Saturday morning when he and another vendor, 65-year-old Beverley Brooks, were shot and killed at the front of Friendship Lane, in Cross Roads, St Andrew.

Small said Grant was her first son, and she was just about to walk up to the front of the lane when she heard the shots; she would later find out that some of those shots killed her son. "When I got the news I was right at my gate, ready to pull it to go up the lane to the lady (Brooks), because she is my friend. But when I stand up at my gate, mi just hear gunshots, and to know seh mi son was killed with those shots, I can't believe," she said.

Grant's common-law wife, Camille Wallace, said he had just renovated his stall the Friday before, in hope of expanding his business.

She said his death has shaken the family, especially his three children with whom he shared a very close relationship.

Meanwhile, a relative of Brooks told THE STAR that she was a family-oriented woman who was well respected in her community.

"She was all about her kids and grandkids. She come out in the mornings to set up her stall so she can mek some money. It just sad fi know seh wah 65-year-old woman get so much gunshot fi nothing at all," she said.