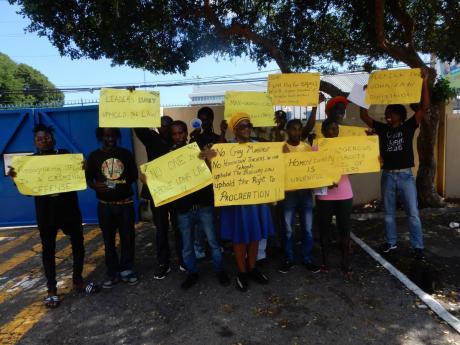 Members of the Kingdom of Debre Zeit group show their placards at the Gleaner Company Media Limited’s office yesterday. 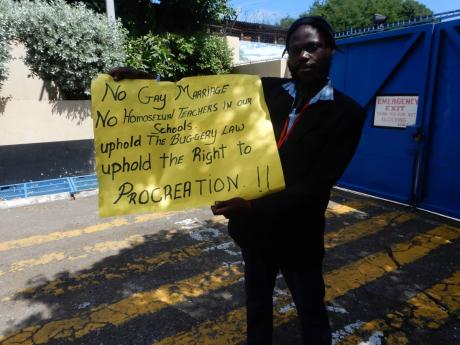 A group of Rastafarians staged a peaceful demonstration outside the gates of King's House yesterday to lash out at the Government, who they accused of 'embracing' J-FLAG as a human rights organisation.

"We are standing up against the Government who have given 'recognition' to a homosexual institution which is J-FLAG. The Buggery Law of Jamaica states that there is a 10-year prison sentence against any unlawful or unnatural behaviour between the same gender. When we have the Government violating the constitution laws by giving recognition to a gay institution, then we have leaders who are not fit to fulfill the post that they hold," said the group spokesperson H.I.M Luel Ras Mestin.

The group members are part of human rights organisation Kingdom of Debre Zeit.

They told THE STAR that the aim of the protest is to protect the rights to procreation for the entire Jamaican society.

"Furthermore, since the LGBT organisations do not practise procreation in reality, then how can they be recognised as a corporate body or human rights defender? They are not fulfilling the moral obligation to secure the right to procreation under article 16 (Universal Declaration of Human Rights charter)," he added.

Ras Mestin said that the group left a copy of a letter which gives details of the 'offences' that are being committed by the Government.

"We were told that we would get a response so we are awaiting that," Ras Mestin said. "The Most High warned that if we follow in the footsteps of Sodom and Gomorrah then we shall face judgement. Therefore, we are doing like Lot in The Bible and lash out against it."