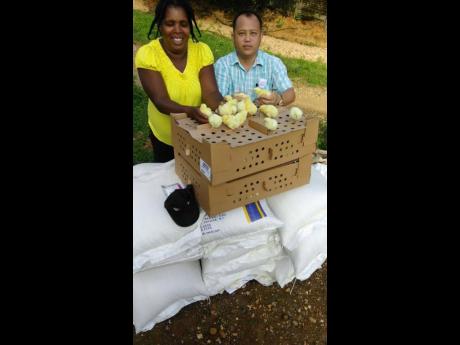 Sharon Maxwell is all smiles as she receives boxes of chicken from Stephen Liao. 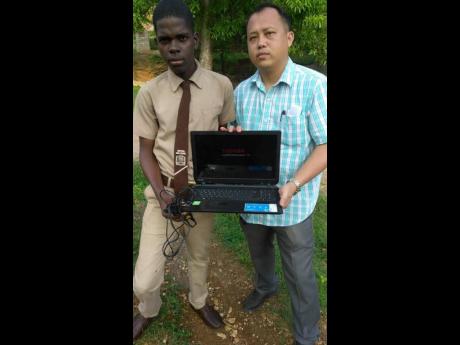 W h en Clarendon businessman Stephen Liao read about the hardship Sharon Maxwell was enduring with her seven children in the April 23 publication of THE STAR, he decided that he could not turn a blind eye and recently visited the family and offered his assistance.

Although Maxwell and her family live in the violence prone area of Mango Walk in Effortville in the parish, this did not prevent the businessman, who owns and operates National Self-Serve Wholesale, to take the trod into the area to offer several much needed items.

"One of her sons really wanted to a laptop to do his school work. He is doing really well academically and is even on the quiz team so I provided one for him. The roof of her home was in a deplorable condition and she was seeking help to replace the zinc so what I did, was instead of just buying her the zinc alone, I gave her a business start. They say it's best to teach a man how to fish instead of just giving him a fish. So I gave her over 200 chickens and feeding to last a while," he said.

Maxwell had managed to save and build her two-bedroom house from a very meagre salary of $5000 a week.

However things have got worse for the dedicated mother who earlier stated that whenever it rains she and her children had very little choice except to sleep in a drenched home.

Sadly, Maxwell said that she does not receive any assistance from any of her children's fathers, and she is often overcome with frustration.

However, she said that she is motivated to try harder, as she does not want her children to experience what she has had to endure.

In addition to thanking THE STAR for sharing her plight, the 47-year-old domestic helper showered Liao with praises, stating that he had given her a chance at life.

"I always want a chance in life to do something for myself ... mi feel so happy he give mi a chance. Mi nah tell no lie, mi never expect say him would come inna Farm because of the whole violence. Eye water full up mi eye when mi see him come the day with the tings dem. Mi can now fix the zinc dem and still give the pickney dem food to eat because mi have mi own business ya now," she said.