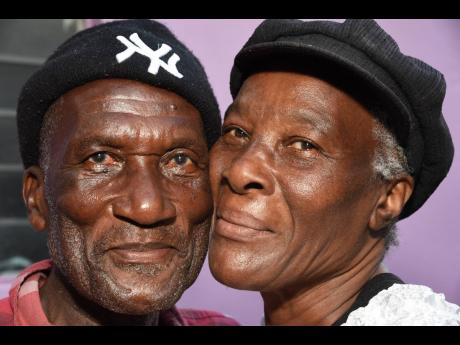 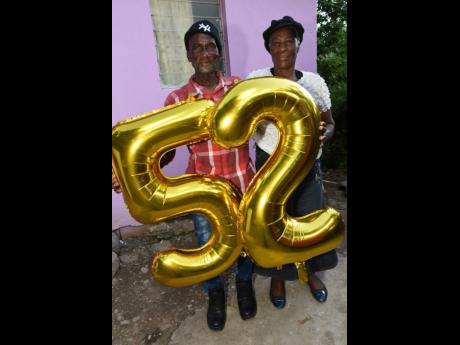 One can easily sit for hours and listen to Miriam and Dennis Edwards share their love story.

The couple, who recently celebrated their 52nd wedding anniversary, is still very much happily in love and credits their decades-old union to always compromising wherever possible.

Sitting in their living room in New Ramble, Mavis Bank, the Edwards stated that they tied the knot on October 22, 1967, just a few months after he asked her if she was interested in marrying him.

Edwards, 77, stated that he had his eyes on Miriam, 70, (affectionately called 'Beverly') since she was 15 years old, but didn't have the courage to approach her until two years later.

"I was in the United States for a while and I had a girl that I planned on marrying when I returned, but when I came back I realised that she was pregnant for someone else. I never make any fuss, I just leave her alone," he said.

He continued: "One day I saw Beverly walking with her mother and after greeting them, I secretly asked Miriam if she would marry mi and she tell mi say if she dweet, is a chance she would a take. Mi beg her not to tell her mother about what I had asked her because I used to work for her mother on their farm," he told THE WEEKEND STAR.

Miriam would, however, confide in a family member, who then told tell her mother about the 'marriage proposal'.

This did not sit with her mother, who moved her out of the community a week later.

"After mi hear say she leave, mi couldn't eat. A bare rum mi drink. A few days later mi get a letter from her, and mi 'glad bag' buss. She tell mi say a St Thomas she deh, at Epping Farm, and immediately mi start walk the seven miles to find her. But when mi reach near whe she live, mi start wonder if mi a go see a next man there, so me turn back. The next day, mi go back there and see her," he said with a smile.

Edwards said he returned to Mavis Bank and asked Miriam's father if he could marry her, but was sternly told her that his daughter wasn't ready for marriage.

However, months later the couple got the blessings from both of Miriam's parents and the two tied the knot. They have lived at the same address for the entirety of their marriage.

"We lived in a wattle and daub house at first before building a concrete structure. The day we got married, I told her that she would never, ever have to worry about me cheating on her because I love her with all my heart. She used to walk miles with me to come to my farm, but after a while I told her to stay home because she was already taking care of the children at home," he said.

The Edwards' union produced eight children, one of whom is deceased. Like every other couple, they stated that their relationship was not all marital bliss but had its fair share of challenges.

"I used to love drink, and sometimes I would drink and get drunk and leave her alone with the children. A lot a times she needed me and mi would gone play domino and drink. One night mi drunk and sit down on a stone and mi just hear a voice say, ' yuh ago make the woman pickney shame eno', and when mi look round mi nuh see a soul. Mi go home same time and tell her say she nah go ever see mi drink and drunk again," he said.

Edwards said many persons did not think the union would last, but that they were determined to make it last.

"When we got married, a lot of people had bad things to say. There was even this one person who said the world soon see our name in Gleaner say we divorce, but they never lived to see that," he added.

Gazing adoringly at her husband, Miriam described him as a hard-working individual who would move mountains for her family.

"If I should get young and given a next chance to live my life, I would not change a thing. I would still choose him because I love him and he really treat mi good, He is the best husband anyone could ask for. Up to this day, he still buys me nice things. He is really responsible and loving. If him ever see mi look sad, him nah stop until him see a big smile on my face," she said.