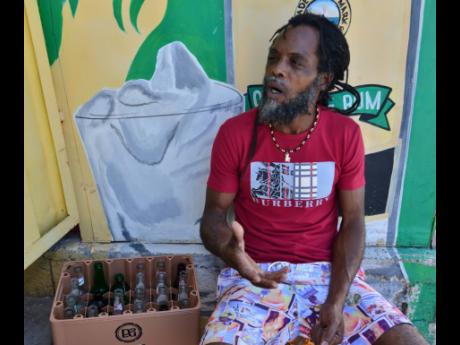 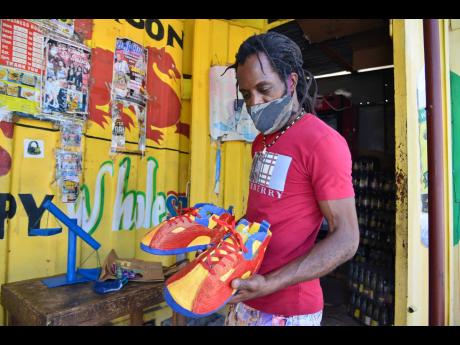 Marvin Hibbert has won a National Housing Trust competition, to build the model of a dream house. 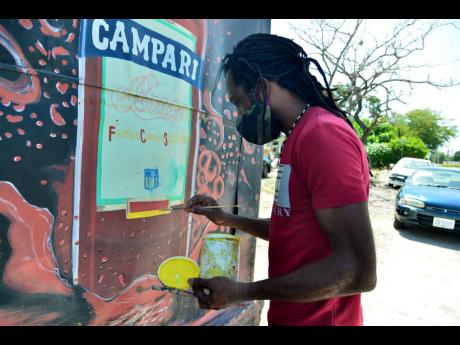 Hibbert has done branding at hundreds of locations across the island.
1
2
3

When he was a student at Norman Manley High School in St Andrew, Marvin Hibbert was a fanatic for drawing and painting, but he never failed to realise that his classmates were on top of their game and more advanced than he was at art.

But today, he can smile comfortably that he has surpassed those former classmates in experience and skill.

"All a my friend dem inna practical used to draw better than me. I couldn't draw as good as them, but now I know I may have turned out greater than all of them right now," he told THE STAR with a bright smile.

He was proud when he spoke of the numerous painting and branding contracts he was able to receive.

In addition to his drawing and painting skills, the Rastafarian, who is a resident of Trench Town, St Andrew, said that he is able to construct anything from cardboard, especially for children's school projects.

And now that the Government has made it a requirement for persons to wear masks in public places, due to COVID-19, Hibbert has been making some very colourful items for sale. He shared that painting jobs have been impacted by the virus, but he said he will remain strong and creative.

Hibbert said that he got real serious about art when he graduated from high school in the '90s. But according to him, realisation of his talent began as a student of Jones Town Primary School in St Andrew.

"Art is an inborn thing. Mommy and Daddy used to cuss we and seh all we a do a mark up the books."

After leaving high school, Hibbert recalled collecting large rolls of paper and began drawing "pure Bob Marley", and said it was from there he charted a path that would see him earning a living from the field.

"Because mi grow up in the area, and Bob Marley come from Trench Town, it was just about Bob Marley in my youthful days. Mi used to even draw cartoon characters. Mi never know it woulda become so serious where a it finance everything I do, like send my children to school and buy food and everything."

He has done branding for entities like Pepsi, Coca-Cola, Red Stripe and Wray & Nephew.

"Wray & Nephew a di one weh push mi out there big. I have to give thanks to Mr Kevin Frith. One day mi inna mi yard and mi friend Alliman come shout mi seh dem a look 10 artist fi brand fi Wray & Nephew. It was always my dream fi brand fi any company. This was in mid-2013. I met with Mr Frith and he interviewed me and showed me some pictures and asked if I could draw them.

"From dem time, him tek mi inna di streets and seh mi fi show him some work mi do already. Mi carry him go Iris Gelly Primary School go show him the pictures of the national heroes weh mi draw with the coat of arms. I drive around showing him some walls I did for churches, and that's how he discovered me in 2013."

He said Frith took him to Ewarton, St Catherine, "which was the first place we started branding Wray & Nephew".

After branding at more than 50 locations across the island for the liquor company, Hibbert gained the exposure and experience that would see him also branding more than 100 shops and other locations with Lucozade. He said he has done more than 100 locations for Pepsi as well.

"Things could be better but I am satisfied with weh mi achieve so far. I would want to continue doing my work so mi can see the value of my work in terms of how it allow my children to achieve a good education, plus the influence of seeing their father stand up for who he really is as a Rastaman."

Hibbert has won a National Housing Trust competition, to build the model of a dream house. He received a trophy and a cash prize.

He is also proud of his work which shows boxers on the wall outside the Stanley Couch Gym in Kingston.

"A me draw dem. If you go inside the training room, you will see some big boxers on the wall. Di work even mek mi meet a lot of entertainers and great people. It carry me right around the 14 parishes. I don't reach international yet, but the level at which I have made my mark as a self- taught artist, and go so far, I feel like mi do a pretty good job so far. I push my own self to brand for big companies," he said.